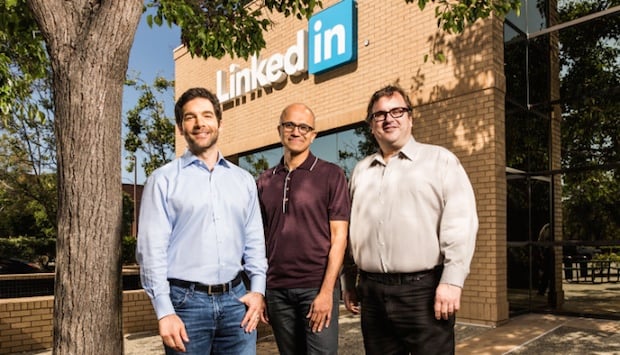 Microsoft’s acquisition of professional networking site LinkedIn for $26.2bn announced earlier this week came as a surprise to many.

While LinkedIn will continue its operations independently, the deal is hoped to help both the companies collaborate on merging “Microsoft’s professional cloud with LinkedIn’s professional network,” according to Microsoft CEO Satya Nadella.

“Combining the world’s largest professional social network with Microsoft’s vast information worker user base will give Microsoft unprecedented data and insights that can be used to extend and differentiate its Office and Dynamics offerings, build new revenue streams, and, potentially, transform the way people source talent and collaborate in the gig economy and the extended enterprise,” IDC said in a note.

“With 433 million members in over 200 countries and territories, LinkedIn is Microsoft’s biggest bet yet.”

Looking specifically at the Middle East, both the companies have been boosting operations in the region.

Microsoft, which set up an office in Dubai 15 years ago during the launch of Dubai Internet City, has substantially grown its presence in the regional market.

Nadella even visited Dubai in January 2016 when he met with the UAE’s Vice President and Prime Minister and Dubai’s ruler Sheikh Mohammad bin Rashid Al Maktoum.

They discussed ways of collaboration for the emirate’s smart city plans.

Meanwhile LinkedIn, which opened its first regional office in Dubai in 2012, has also reported strong regional growth. MENA user numbers have increased from five million in 2012 to 17 million members in 2015.

The company’s workforce has also increased from six employees to more than 90 in the same period.

“The Microsoft LinkedIn acquisition creates a whole new set of offerings for the technology company to pursue in the Middle East,” explained senior research manager of Software at IDC Middle East, Turkey and Africa Megha Kumar.

“This creates more opportunities for Microsoft to pursue with organisations in the Gulf. Firstly, it allows Microsoft to provide customers with an entire social business stack – since it will allow them to address the needs of end –user customers and employees as well.

“The second most common use of social business engagement in the Middle East highlighted by CIOs in the region has been around improving employee collaboration and engagement.”

“This allows Microsoft to provide a whole new set of ad revenues in addition to search ad revenues from Bing,” she said.

The company will also gain access to vast amounts of data, allowing it to provide analytics to customers and improve the access and provisioning of information to users, Kumar added.