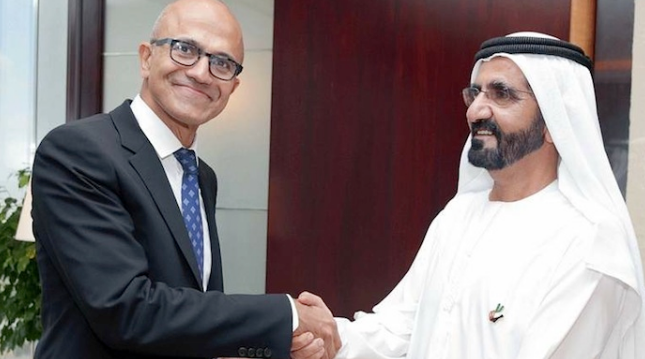 Sheikh Mohammed, also the Vice President and Prime Minister of the United Arab Emirates, highlighted the country’s plans to adopt new and efficient technology solutions in the government sector to improve services.

The smart city project, announced two years ago by Sheikh Mohammed, aims to transform Dubai into one of the world’s smartest cities and calls for providing ‘smart’ public services through the latest technologies.

New laws issued to oversee the project late last year call for encouraging innovation by fostering collaboration between the public and private sectors.

During the meeting, Sheikh Mohammed also discussed the key objectives of the UAE’s national innovation strategy which aims to make the Emirates the most innovative nation in the world by 2021.

He also expressed his appreciation for Microsoft’s role in the global information technology sector and pointed out the UAE’s cooperation with major international technology companies.

For his part Nadella praised the UAE’s approach towards development and its focus on implementing the latest technology solutions.

He also thanked the UAE’s leadership for providing a supportive environment for global businesses and international investments.

Microsoft set up an office in Dubai 15 years ago during the launch of Dubai Internet City. The company has since grown its presence in the regional market.

Nadella, who took over the helm of Microsoft in early 2014, has seen the company perform well in the last few quarters. The tech giant saw its stock gain 15.9 per cent in 2015.

Microsoft’s latest operating system, Windows 10, has also been well received across the world. On Monday the firm confirmed that the OS – launched less than six months ago – is active on more than 200 million devices globally.