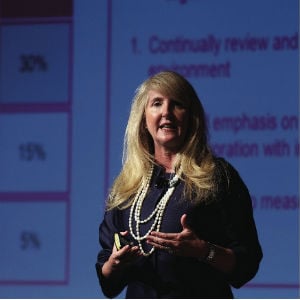 The last two years have been revolutionary for the region’s IT departments. No longer seconded to the corporate sidelines or the office basement, 40 per cent of Middle East and Africa-based CIOs are now sitting at the boardroom table with the CEO.

In the West, the percentage of CIOs reporting directly to the boss ranges from just 28 to 40 per cent. Nancy Thomas, a vice president at IBM’s Global Business Services, attributes this Gulf boardroom sea change to a regional need for fast growth and innovation, as well as a lack of legacy – most local IT departments are decades younger than their Western counterparts.

“Now that regional CIOs are reporting to the CEO, they will be CIOs with business leadership and lend their voice to the company. The new 40 per cent of CIOs will shape the business agenda and enable it,” she said.

In fact, the top three concerns of regional CIOs – business intelligence, people development and the ability to get to know clients better – were identical to that of CEOs, according to the global IBM survey which sampled more than 3,000 IT heads across 71 countries.

Other focus areas for regional CIOs were ‘transformation’ and ‘pioneering”. Around 70 per cent of MEA CIOs viewed themselves as pioneers, principally because they are frequently tasked with entering new markets with varying maturity levels.

“We saw that MENA CIOs are ahead of their global peers in the pioneering sense – they are stepping outside of their four walls and creating stronger relationships with their customers and providers; they are using analytics to share information, maybe in a cloud environment,” said Thomas.

“Also there are many family-owned businesses in MENA, they are willing to be more risky – they don’t have shareholders and boards and they can make decisions much quicker. It’s done at a smaller level.”

As well as leading the business in a pioneering sense, CIOs have naturally come to the fore of organisations due to their role as data gatekeepers; more often than not, the keys to driving the business forward and differentiating the firm in a competitive environment lie in the mounds of information that travel though the organisation daily – email, requisitions, servers, customer relationship software, social networking and databases.

“In a fast-moving environment, there is a real need to take all the big IT data and turn that data into information through dashboards that can be used by the business on a real-time basis. What is the most meaningful data to their business and what is going to make them more competitive? Are they delivering quick enough for the business requirements? Its a very competitive environment and the speed and volume of velocity is completely different to a few years ago. What are customers saying on your website and what are they saying on others?” added Thomas.

As the CIO and CEO roles continue to become more closely aligned, analytics and cloud computing services will be increasingly leveraged, as well as virtualisation technology.