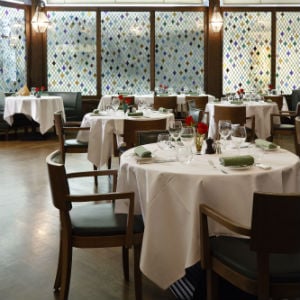 If there’s one thing the numerous restaurants and bars in Dubai lack, it’s live music. And live jazz music at that. Hence I was intrigued on my visit to The Ivy to experience their new ‘Live!’ event, taking place every Thursday. Essentially it’s just a normal night with a jazz trio playing in the corner. But given that’s it jazz, and that The Ivy lends itself to a more sophisticated and lively musical vibe then what you might experience over the PA system of most restaurants, the musical theme struck the perfect note.

Walking into The Ivy, whose reputation precedes itself with a famous elder branch in London and a second in New York, it was hard to know what to expect.

From the outside, it would appear to be another elegant restaurant situated in one of Dubai’s clean malls. After all, Emirates Towers are a world away from Covent Garden. But once through the doors any cynicism was banished; the rich oak panelling, classic British racing green colours and signature harlequin-style stained glass windows screamed “Welcome to The Ivy”, while the jazz trio could have walked straight out of it’s Soho neighbour, Ronnie Scott’s.

The restaurant itself met expectations – which were high. High because of our location and higher because of the now world-renowned restaurant brand. Service was the right level of formality; quick attentiveness early on which blended into the surroundings when a private discussion or simply gorging yourself on the sumptuous food took precedence.

The mixed sashimi to start was one of the more resplendent trays of sushi I’ve seen, while the shellfish cocktail was a seafood lover’s fantasy. With other choices such as foie gras ballotine, beef carpaccio and Severn & Wye smoked salmon, it was tempting to ignore the mains and customise a tapas-style meal from the hors d’oeuvres. But the second course was already on its way…

It’s rare that a tenderly-cooked, juicy rib-eye steak with bearnaise sauce can be bettered in this reviewer’s eyes, but my friend’s roast monkfish with lobster potatoes and mussels was a food-envy oversight – both dishes were without flaw.

As the night continued, and an Eton Mess was devoured at the table – a tough choice from the rich selection of deserts – the jazz trio, part of the rhythm section of the Abu Dhabi Big Band, began their third jam of the evening. In all they weren’t far off a two-and-a-half hour set – a time you’d be happy with at most professional concerts.

Far from being intrusive, the trio gave a funky, lively and soulful touch to the restaurant. The only bugbear was to question why the band was placed on The Ivy’s terrace, a conservatory-style section of the restaurant. The main room was full and thriving and surely would have suited the music better. The Ivy doesn’t need to have two concepts within one venue. If Live! is only going to be a weekly occurrence, then embrace the music fully for one night a week and let the band loose on the main crowd.