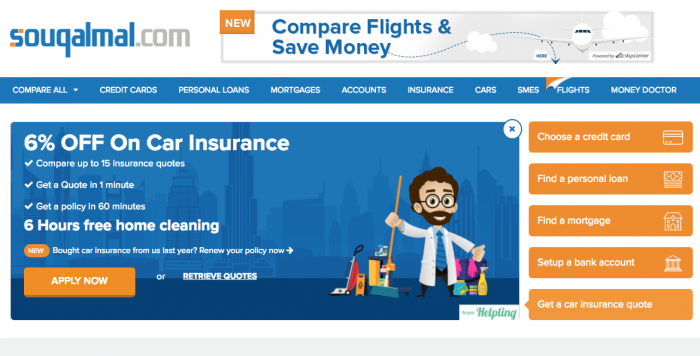 Speaking at the company’s announcement of a $10m series B investment round last month, CEO and founder Ambareen Musa said she was particularly excited by the prospects of the kingdom as women prepare to take to the road from June 24 next year.

A study released by Kantar TNS in October revealed 82 per cent of women in the kingdom are contemplating getting a driving licence.

Souqalmal plans to officially launch a car insurance comparison platform in Saudi Arabia through a broker in the coming months after launching the service in the UAE last year and seeing 800 per cent growth to date.

“When we started to go into Saudi we were asking what does that mean for us from a profit and loss perspective. What’s happening now with women being able to drive is ideal, and on top of that there are more and more women financially dependent,” she said.

Souqalmal’s funding round was led by the SAR500m ($133.3m) Saudi-based Riyadh TAQNIA Fund and saw participation from UK comparison site GoCompare in its first international investment and UAE Exchange Group.

Riyad Capital vice president and head of private equity funds Ivo Detelinov said the company had decided to invest in Souqalmal prior to the decision to allow women to drive but it was clear the insurance industry would be one of the main beneficiaries.

“Car road assistance you may or may not need years into your driving career but day one you need insurance. I haven’t even thought through where this can touch but there are many aspects we can gain from this situation.”

Beyond its plans in Saudi Arabia, Souqalmal also plans to launch news business lines including for health, travel and home insurance, develop its technology platform and invest in marketing.

It is also eyeing expansion in Bahrain, followed by the wider GCC, before looking at markets in the Middle East and North Africa.

“We look at the size of the opportunity here in the GCC market and clearly it’s a moment in time when the market is set to explode especially given what’s happening in Saudi Arabia so it seemed like an opportune moment for us to make our first international investment,” said GoCompare chief strategy and investment officer Faisal Galaria.