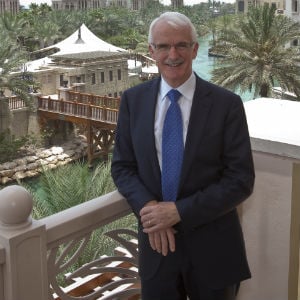 “We have some very specific discussions going on in Mumbai and Delhi,” Lawless told Gulf Business in an exclusive interview without disclosing further details.

The group, which manages properties in London, New York, Shanghai and Rome, will also focus strongly on growing in the Middle East and Asia, he said.

“Asia should come through the economic situation that we are now facing in good shape. We see a lot of demand in emerging countries like Indonesia, Philippines and all of Southeast Asia. There’s also plenty to do in countries like China and Pakistan,” said Lawless.

Within the region, Jumeirah has active discussions going on in five cities in Saudi Arabia including Jeddah, Riyadh, Al Khobar, Mekkah and Madina.

Regarding Jumeirah’s earlier target to have 60 hotels by the end of 2012, Lawless clarified that the number included hotels with management contracts signed up, those under construction and hotels under operation.

“Now will be at 60 by the end of the year? Probably not. I think that we hadn’t anticipated when we had made these pronouncements [in 2008] that we were going to go through the recession we went through in 2009 and 2010,” he said.

“In that respect I am very pleased with what we have achieved. It’s sort of a moving target because sometimes we have hotel management agreements signed up and then the investor will say for whatever reason – ‘well I am not going ahead’- so that one drops off, but another one comes on.

“So currently we are running at about 51 hotels under development or in operation in total,” he added.