Israel has showcased its 1,500 square metre pavilion at the Dubai Expo 2020, which was produced by AVS and designed by Knafo Klimor.

The architecture reportedly draws its inspiration from the arid landscapes of Israel and other Middle Eastern countries.

It adopts the shape of sand dunes and shaded Middle Eastern streets. These dunes are framed by seven LED screen gates at a height of 15 metres 15m using 630sqm LED panels, creating a significant open space for people to gather, discuss and share ideas.

The dunes sit on a raft foundation, the pavilion has a steel structure prepared in the workshop in Dubai and assembled on-site using dry connections and multiple, approved, cladding materials for the finish.

The dune floor is formed using a thin layer of concrete on top of a trapezoidal steel paneled structure to create the dune’s unique geometry, this is then topped with sand-colored, recycled rubber.

David Knafo, managing director of Knafo Kilmore architects said: “The Israel pavilion offers an open space, a dune surrounded by seven gates reflecting joy and hope. The dune offers a place where imagination can create a breakthrough for the future of our planet, its ecological diversity and the preservation of human heritage. The present climate and ecological crisis call for urgent mobilisation of global good will, new technologies, inventions and close partnerships, in order to create new horizons for the next generations.” 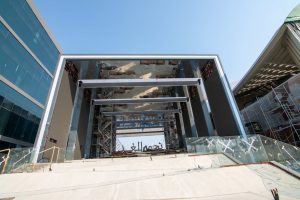 The pavilion, spearheaded by the Israeli Ministry of Foreign Affairs uses many unique and smart elements. The LED screen wall can be used by the visitor as a game engagement with people in Israel, as well as have certain control over the live presented content. These LED screens are also the cladding material of the seven gates inner walls.

The LED screens will be presenting a variety of images and videos showcasing varied and timely content, such as; reducing world hunger, protecting nature, energy for everyone, water conservation and adaptation for arid countries, health technologies and cyber security. The dune level is also equipped with virtual reality binoculars, allowing visitors to experience the landscape of Israel.

On top of the dune, there is a large, illuminated, feature sign made using an aluminium structure with a translucent front cover and LED lighting fixtures inside. The sign is formed from letters in “Aravrit”, a font invented by the typographer, Liron Lavi Turkenich 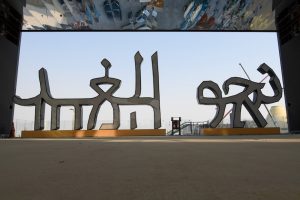 Aravit is a hybrid of two local scripts, combining Hebrew and Arabic characters. Each letter is composed of Arabic on the upper half and Hebrew on the lower half. The meaning of the sign text in both languages is the same: “Towards tomorrow”.

In the main hall inside the pavilion, a 360-degree immersive show on 250sqm of screen, will present the Israeli innovation for a better future.

The pavilion creates a microcosm, with a temperate microclimate achieved using shading and sprinklers. The pavilion is designed to be demolished after the expo ends and except for the concrete floor, all the construction material and elements will be recycled.

How to determine and increase pricing power