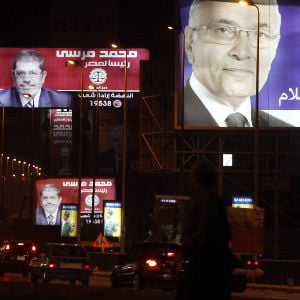 The Muslim Brotherhood and a military man close to ousted leader Hosni Mubarak courted defeated first-round candidates in Egypt’s presidential election on Saturday, each trying to claim the mantle of the uprising before a run-off next month.

State television said the Brotherhood’s Mohamed Mursi led this week’s vote with 26.4 per cent, against 23 per cent for ex-air force chief Ahmed Shafiq, according to preliminary results.

Hamdeen Sabahy, a secular leftist came a close third with 21.5 per cent, followed by independent Islamist Abdel Moneim Abol Fotouh. Only the top two go to the deciding vote on June 16 and 17. Official first-round results are expected on Tuesday.

But Sabahy’s lawyer said he would demand that the electoral committee halt the election until alleged voting irregularities had been investigated and until the constitutional court rules on whether Shafiq was legally eligible to stand.

“There are several irregularities that must be looked into before official results are announced and before the run-off starts,” the lawyer, Essam El-Islamboly, told Reuters.

The choice between Mursi and Shafiq, representing forces that have wrestled for the past six decades, has dismayed many Egyptians who voted for candidates offering a middle ground.

They fear a victory for the 70-year-old Shafiq, Mubarak’s last prime minister, would snuff out hopes for change ignited by last year’s uprising, while a win for Mursi would pitch Egypt into the uncertainties of experimenting with Islamic rule.

The Brotherhood invited Sabahy, Abol Fotouh and other politicians for talks to canvas their support before the runoff, but a source in Abol Fotouh’s campaign said he would not attend.

Warning of “determined efforts to recreate the old regime”, it said parties that supported the uprising against Mubarak must unite “so that the revolution is not stolen from us”.

The Brotherhood already holds the biggest bloc in parliament after an election completed in January, but has been unable to assert itself against an army-appointed interim government.

WHO STOLE THE REVOLUTION?

Shafiq used strikingly similar language at a news conference in which he addressed youth groups that spearheaded last year’s revolt. For many, he represents everything they want changed.

“Your revolution was stolen,” Shafiq told them. “I pledge to return its fruits to your hands.”

He said “the clock cannot be turned back”, but that he would not let Egypt “drown in chaos”.

Much of his rhetoric indirectly targeted the Brotherhood, playing on fears among Egypt’s minority Christians and secular liberals that a Mursi presidency would threaten their freedoms.

“No exclusion of anyone or distancing of anyone,” Shafiq declared. “Everyone has a right to be a part of this nation.”

On Friday he told Egyptian television he saw no problem with the idea of a Muslim Brotherhood-led government if he were elected president.

The generals who took over when Mubarak quit on Feb. 11, 2011, have promised to make way for a new president by July 1, formally ending a messy and often bloody political transition.

But the military, the source of all Egypt’s past presidents, is keen to keep its privileges and influence, preferably enshrined in a new constitution. Political wrangling has held up the drafting process, so the next president will take office not knowing his powers or those of parliament and government.

Shafiq has won support among Egyptians who see him as the kind of strongman they feel the country needs to end 15 months of political instability, economic failure and rising crime.

Although Mursi topped the poll, his score was unimpressive compared to the Brotherhood’s performance in the parliamentary election in which it gained nearly half the seats.

Reform-minded independents such as Abol Fotouh and Sabahy between them won more votes than either Shafiq or Mursi, hinting at the growth of a new centre in Egypt’s fluid political scene.

Abol Fotouh has already indicated he will throw his weight behind the Brotherhood to “stand in a united front against the symbols of corruption and oppression”, but other potential partners in an anti-Shafiq front will demand a political price.

The secular Justice Party, formed after last year’s uprising, expressed “deep sorrow” at the result and set tough terms for the Brotherhood to win its support in the run-off.

It demanded a presidential system, whereas the Brotherhood favours a stronger parliament, called for a secular vice-president and said the Islamist movement must formally register itself for the first time in its 84-year-old history.

A Brotherhood party official, Yasser Ali, said the talks would discuss the vice presidency and a coalition government.

Long a thorn in Mubarak’s side, the Brotherhood has looked increasingly isolated from other parties since his fall, first facing accusations it was slow to join the revolt and then that it acquiesced in the military rule that followed.

Trust in the Brotherhood eroded further when it reversed a pledge to stay out of the presidential race. The group, founded in 1928, says it is the target of a smear campaign.

Former US president Jimmy Carter, whose Carter Center was among several foreign and local organisations that monitored the first-round vote, said procedures appeared to have been fair.

“I have confidence in this process, despite the fact that it’s been confused on occasion,” he told a news conference.

“My own impression is that … there was no pattern reported by us or other international witnesses or domestic witnesses that showed the procedure favoured a particular candidate.”

However, the Center’s preliminary report noted some procedural irregularities and lack of secrecy for voters in some polling stations.

“The election authorities prohibited access (for monitors) to the final aggregation of national results, undermining the overall transparency of the process,” it added.