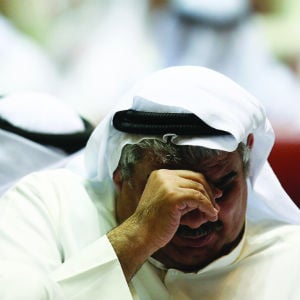 In 2005, a gold rush of initial public offerings (IPOs) was in the works. Abu Dhabi-based Aabar Petroleum Investments Co’s 55per cent flotation of shares was 800 times oversubscribed, while about half of Saudi Arabia’s population applied for shares in Bank Al Bilad that same year.

A year later, Qatari Islamic lender Masraf al-Rayan booked a sports stadium to receive IPO applications, but the venue was unable to contain the subscribers who queued outside the facility, creating traffic jams and prompting intervention from police to contain the crowds.

Six years on, the IPO landscape is sparse. IPOs in the Middle East in the second quarter of this year raised $487 million, compared with $590.6 million in a year-earlier period, according to Ernst & Young. Offerings in the first quarter of this year fell 95 per cent to a five-year low of $21.7 million, the advisory said.

The outlook for the region’s IPO market is dim, given the low liquidity and valuations, regional political unrest, and the global stock market turmoil spurred by the US credit downgrade and the snowballing sovereign debt crisis in Europe.

In Saudi Arabia, United Wire Factories Co closed its IPO in August, preceded by Saudi Integrated Telecommunications Co’s offering in June, while in the UAE, property developer Eshraq Properties, and two insurance firms Insurance House and National Takaful Co sold shares. However, several IPOS have since been cancelled or postponed.

“In the next two years, IPOs will be at the same low level of 2009/2010,” said Imad Ghandour, executive director at investment firm Gulf Capital and a co-founder of the nonprofit MENA Private Equity Association. “IPOs require confidence in the political environment and the financial markets, which are down with what is happening in the US and Europe.”

Saudi Arabia, which hosts the regions’ largest and most liquid stock exchange, is expected to provide IPO opportunities, with companies such as Hail Cement Co set to sell shares this month. Offerings have been announced in Oman and the three mobile operators in Iraq are expected to go public. The other large regional IPO market in Egypt has faltered with the onset of political upheaval in January, and the mayhem gripping Syria also put a cap on IPOs that increased in 2010 after the equity market was launched in 2009. Most of the offerings this year have been relatively small and the market is still waiting for a big IPO such as the much-anticipated share sale of Qatar Airways.

Even regional companies that sought to list abroad this year before the global stock meltdown in August scrapped plans due to the regional unrest. Topaz Marine and Energy, the oil services unit of Oman’s Renaissance Services pulled the plug on its $500 million London listing and privately held Kuwait Energy Co. (KEC) also deferred a London offering.

Companies looking for better valuations have in the past listed in international markets such as Dubai-based port operator DP World, but the jury is still out on whether such moves add value.

“Our companies are so small in terms of market cap compared to the large international companies in the international markets, they will not show in the price screens,” said Mohammed Yasin, chief investment officer of financial services company CAPM Investment. “Their true value and real investor interest will be based on their value in their local market.”

Analysts blame the mismatch between the price the sellers want and the buyers are willing to pay for the lackluster IPO activity, which is pushing small and medium sized enterprises (SMEs) to turn to private sales for capital.

To assist SMEs in accessing the financial markets, the UAE and Qatar have announced plans to introduce a secondary market for small-cap listings, where requirements are less stringent, however, analysts are not convinced these initiatives will achieve results given the need to change company laws and listing regulations.

“I don’t think these announcements will materialise or reach their ultimate objectives,” said Ghandour. “Even if you go to a small company exchange like (London Stock Exchange’s) AIM, liquidity is a problem.”

Regulators in the Gulf impose listing requirements that are discouraging investors from subscribing to IPOs and more companies from going public. Foreign investors are banned from partaking in IPOs in most exchanges and the fact the Gulf countries have yet to join the MSCI Emerging Market Index dampens international interest in public offerings. In the UAE, companies have to list 55 per cent of their shares, unless they plan to join NASDAQ Dubai, which has a minimum of 25 per cent float size.

Gulf companies going public also struggle between selling shares at par value or through a book building process. Gulf regulators have long propounded the par value approach, setting a fixed price to shares to spread the wealth to citizens and protect retail investors, who are the majority.