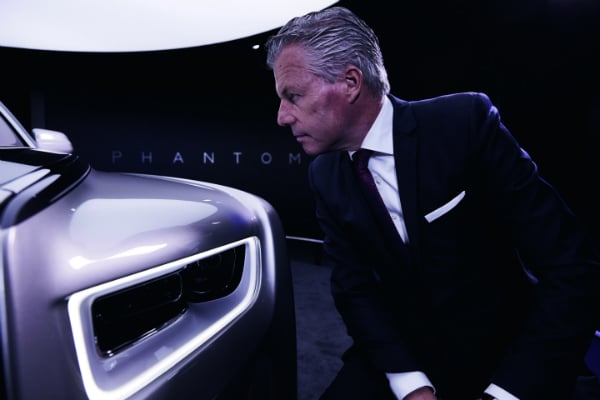 Although much of the region’s focus may be on other areas of the economy, one segment that has not escaped the downturn linked to lower oil prices in the Gulf Cooperation Council and wider Middle East has been the luxury car market.

Once a darling for many of the big brands within the industry, which have showrooms throughout the key cities, demand for the likes of Bentley, Aston Martin, Ferrari and Rolls-Royce has been hit in key markets in recent years.

“This region of course is a little bit more difficult than it has been before due to many issues, be it oil price, economy and the stock market situation,” Rolls-Royce Motor Cars CEO Torsten Müller-Ötvös explains.

“That of course has impacted also consumer sentiment to a certain extent and for that reason our business formally had been stronger in the Middle East.”

The CEO’s words are by no means an understatement. In what was a record 2016 for the company, with global sales up 6 per cent to 4,011 cars and demand increasing 28 per cent in Europe and 51 per cent in Japan, the Middle East was the only major region where Rolls-Royce saw declines.

And he is expecting a similar negative result by the end of 2017 amid tough conditions in the wider car market that have seen new car sales down 20-40 per cent in key Gulf countries in recent quarters.

Despite this Müller-Ötvös’ mood is far from one of doom and gloom, particularly given that the Middle East remained the company’s third largest market last year and was still home to its highest-selling dealer, with Dubai distributor AGMC ending Abu Dhabi Motor’s three-year tenure at the top.

“I wouldn’t say this is a marked effect only because we are in a year without Phantom, and Phantom always is quite a significant part of the business here particularly in the Middle East,” he says.

The company’s new Phantom, the eighth iteration of its flagship sedan, is expected to be one of its biggest moneymakers and the CEO is clearly proud of the final product – available for a cool $450,000-plus.

“If I may say so this car is a triumph, it definitely documents the old testament about the best car in the world and for that reason I’m very happy to see how that pans out.”

The new launch marks Rolls-Royce’s second complete update of the line, which has been known as the car of choice for famous faces including Britain’s Queen Elizabeth II, since being taken over by BMW in the early 2000s. And Müller-Ötvös is expecting particular demand in a region he describes as “traditionally very strong Phantom country”.

The vehicle can reach 60mph in just over five seconds, despite being the largest Rolls-Royce make, and features an aluminium space frame architecture that will be used on future cars. Interior comforts for the likely well-off passengers include lambs’ wool carpeting, polished wood panelling, a drinks cabinet with chilled compartment and glittering ceiling lights.

The CEO is also keen to emphasise that the company hasn’t shied away from new technology either but is doing so in a more subtle way than its peers with a new gallery concept for the dashboard and instrument panel designed to provide key information to the driver behind a piece of glass that can be customised with bespoke art.

“I would say we have done things with Phantom that were unthinkable before,” he says.

“Rolls-Royce is not about technical gadgets, it is very much about perfection in every single detail and also of course craftsmanship and serenity. We by intention don’t over-flood our clients, in particular when they are chauffeured in the back, with let’s say too many details.”

Dealers will begin receiving the first vehicles towards the end of the year and Müller-Ötvös says he is “very confident” following a positive reception from the automotive press.

“We discussed yesterday with our dealer bodies in the Middle East and our order bank is looking very healthy,” he says. 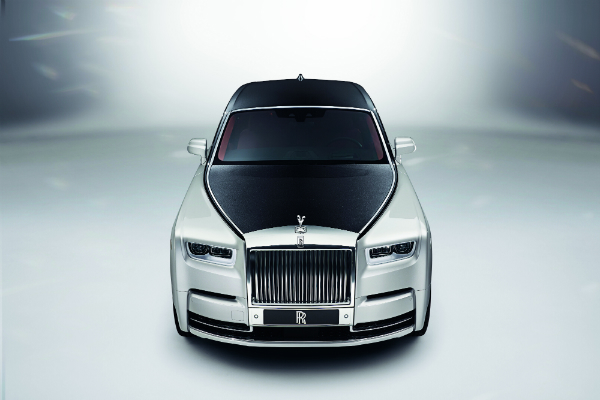 Another area the company has seen particular demand for in the region is its bespoke business, which drew headlines in May after unveiling the custom Sweptail Coupe – constructed over four years for a mystery millionaire.

The prestigious buyer of the vehicle took inspiration from his yacht collection for the design of the car, which is believed to be the most expensive new automobile ever sold at $13m.

A less expensive one-off commission dubbed the Spirit of Calligraphy Ghost was unveiled at last month’s Dubai International Motor show, featuring the words of company founder Sir Henry Royce in Arabic calligraphy across its extended wheelbase, as well as calligrapher Khalid Al Saaei’s Spirit of Ecstasy motif as a silver inlay on the centre panel and embroidery on the rear seats.

But he is also keen to silence critics of some regional tastes that include brighter and more ostentatious colours on vehicles than see in Rolls-Royce’s home UK market.

“I would never call it unusual because I think the last thing you should do is judge things with your own taste palette,” he says.

“We are building dreams – dreams for customers – and every customer has a certain idea in mind when it comes to commissioning a Rolls-Royce and his wish is our command.”

The same is also true of the company’s female clientele, including an established base of women in Saudi Arabia who stand to benefit from King Salman’s decision to allow women to drive by June 24 next year.

Müller-Ötvös says he is delighted by the decision but he is as of yet uncertain regarding the impact on the company, especially given many of its buyers are doing so to sit in the back rather than the front of the luxury vehicle.

“We already have quite a lot of female customers in Saudi Arabia, Sheikhas who have bought the car to be driven [around]. Is this changing? I think it will change. Will it bring in general additional business we haven’t seen yet? Let’s wait and see. It’s hard to say.”

Coming into 2018, another area attracting significant interest from the region is the company’s secretive sports utility vehicle concept project, Cullinan; named after the world’s largest diamond. The company’s foray into the sector follows Bentley’s Bentayga and the soon to be revealed Lamborghini Urus and it is “fully on track” to begin deliveries from the end of next year, according to the CEO.

Rolls-Royce is promising a fully capable off-roader with the same smooth ride quality as its more traditional road cars thanks to a new suspension system.

“This [Middle East] is traditionally very much an SUV kind of market and also knowing from dealers and seeing that we are also getting customer orders for project Cullinan.

“Some people are even getting nervous, maybe some of our so called competitors who are rolling up new product ideas to counteract what we have in mind.

“But rest assured when we bring project Cullinan to the market it will be the Rolls-Royce of SUVs and it will hold to this promise.”

However, it is clearly not just cars occupying the CEO’s thoughts, given recent political decisions that stand to impact the company in the coming years.

Among them is the United Kingdom’s exit from the European Union (EU). Despite being under German ownership since the turn of the century, the company’s headquarters and manufacturing facilities are located in Goodwood, England meaning it would be impacted if the country left the EU without a trade deal in place.

Müller-Ötvös says he is confident the country is going to reach a trade deal “amicable for all parties” by the 2019 deadline for talks and he insists there are no plans to shift elsewhere if this fails to materialise.

“The vote was for Brexit but we don’t have a contingency plan anyway. Would we move production somewhere else in the world? I think that’s probably not the case for us, we are truly British and Rolls-Royce belongs to Britain and will stay in Britain. But of course I’m highly interested that we have proper free flow of goods and people is also very important focus.”

Even further into the future, meanwhile, another key consideration for the company is an all-electric vehicle as countries including the UK move to ban all petrol and diesel cars by 2040.

The Rolls-Royce CEO indicates the company’s first electric car is more a project for the “next decade” rather than “tomorrow” but momentum is building as other manufacturers look to go all-electric in the years to come.

“We might be even forced from the legislative side in certain markets worldwide to tackle emission legislation with a full electric car,” he says.

Moving back to more immediate concerns, Müller-Ötvös says we will have to wait and see whether Dubai can hold on to its crown as Rolls-Royce’s biggest car market for 2017 amid strong international competition.

But with a big year ahead it is clear the famous Spirit of Ecstasy bonnet ornament will not be disappearing from regional roads anytime soon.