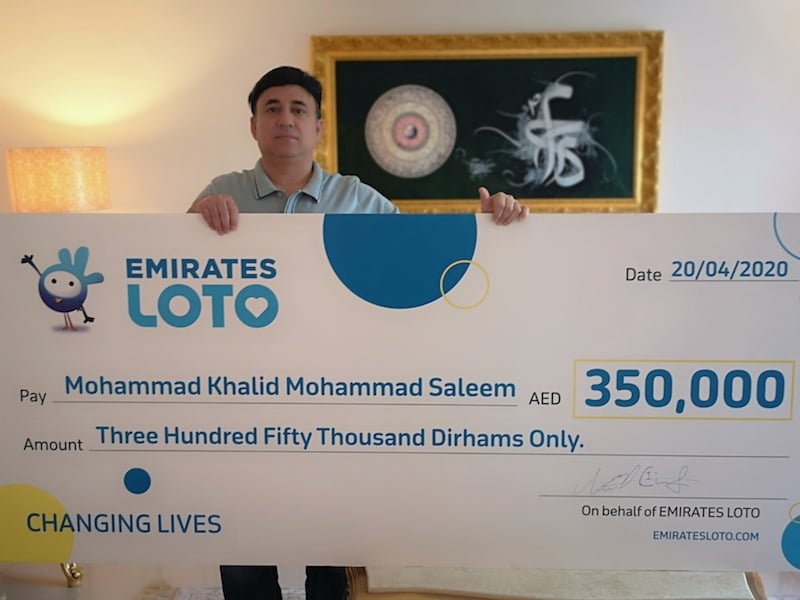 Khalid, a telecommunications engineer who moved from India to Dubai over two decades ago, was surprised to learn that he had a winning combination of five out the six numbers drawn during the lottery.

“We were shocked when we saw that our numbers matched and were unsure if this was really happening. Only when Emirates Loto called us to confirm did we truly know that we won,” said Khalid, the father of three sons, one of whom is in Canada and unable to return to the UAE due to the travel restrictions.

Khalid has decided to donate towards the 10 million Ramadan Meals campaign initiated by Sheikh Mohammed bin Rashid Al Maktoum, Vice President and Prime Minister of the UAE and Ruler of Dubai earlier this week. “I’m finally in a place where I can help others, and I hope that I can bring happiness to others as this has brought to me,” added Khalid.

“We are delighted we were able to change the life of Mohammed Khalil and his family, and thanks to his own generosity, he will also change the lives of others. This is truly what we stand for,” added Paul Sebestyen, CEO of Emirates Loto.

The Emirates Loto lucky draw will take place every Saturday with the results livestreamed across multiple platforms including the Emirates Loto’s website and social media platforms at 7.30pm UAE time.

Those who wish to participate must purchase a collectable via the lottery’s website online and choose six numbers between 1-49.

If a player matches three of the six numbers chosen during the weekly live draw, they win a free entry; if they match four numbers, they win a cash prize of Dhs300.

Each player with five matching numbers stands to win a guaranteed amount of Dhs350,000.

In the inaugural draw held on April 18, no entry matched six numbers and hence the jackpot prize of Dhs35m will increase by Dhs5m every week until it reaches a cap of Dhs50m where it will remain until it is claimed.

During the next draw on April 25, the jackpot prize now stands at Dhs40m.