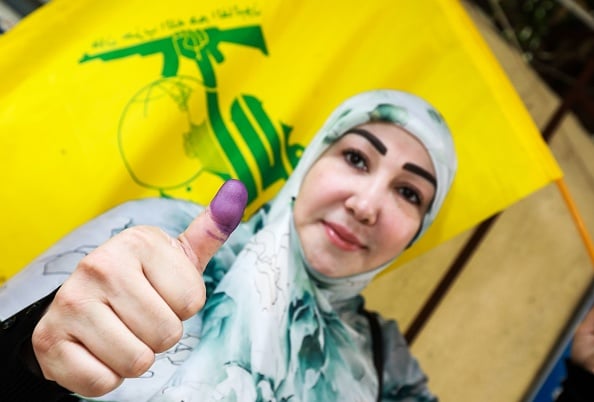 The leader of Shi’ite Hezbollah, Sayyed Hassan Nasrallah, called the result a “a very big political, parliamentary and moral victory for the choice of resistance”.

The number of Hezbollah MPs was the same or little changed, but candidates supported by the group or allied to it gained in major cities. Hezbollah and its political allies won just over half the seats in parliament, according to final results from all but one of Lebanon’s 15 electoral districts.

Branded a terrorist group by the United States, heavily armed Shi’ite Hezbollah has grown in strength since joining the war in Syria in support of President Bashar al-Assad in 2012.

The strong showing by parties and politicians who support Hezbollah’s possession of weapons risk complicating Western policy in Lebanon, which is banking on foreign aid and loans to revive its stagnant economy and receives US military support.

An Israeli minister said the outcome showed the Lebanese state was indistinguishable from Hezbollah, signalling the risk of Israel hitting Lebanon’s government in a future war.

Western-backed Prime Minister Saad al-Hariri lost over a third of his seats, the results showed. He blamed a complex new voting law and gaps in his party’s performance.

But with 21 MPs, down from 33 in the last parliament, he still emerged as the Sunni Muslim leader with the biggest bloc in the 128-seat house, making him the frontrunner to form the next government.

The staunchly anti-Hezbollah Lebanese Forces, a Christian party, emerged as a big winner, nearly doubling its lawmakers to around 15, according to initial indications.

Lebanon’s prime minister must be a Sunni under its sectarian power-sharing system. The new government, like the outgoing one, is expected to include all the main parties. Talks over cabinet posts are expected to take time.

“Hariri is going to be further weakened in any kind of government going forward,” said Andrew Tabler of the Washington Institute. “His ability to substantially tame or restrain Hezbollah… in Lebanon is going to be very limited.”

A “SLAP” FOR HARIRI

Official results released late on Monday showed that Hezbollah, along with allied groups and individuals, secured at least 65 seats. The final results for Akkar district have yet to be announced.

Seats in parliament are divided according to a strict sectarian quota.

Hezbollah-backed Sunnis won seats in Beirut, Tripoli and Sidon, strongholds of Hariri’s Future Movement, where the army was forced to deploy on Monday evening to break up clashes between Hariri and Hezbollah supporters.

The pro-Hezbollah al-Akhbar newspaper declared the election a “slap” for Hariri.

Hezbollah-backed winners include Jamil al-Sayyed, a retired Shi’ite general and former Lebanese intelligence chief who is a close friend of Syria’s Assad.

Sayyed was one of the most powerful men in Lebanon in the 15 years of Syrian domination that followed the 1975-90 civil war.

At least five other figures who held office then returned to parliament for the first time since Syrian forces quit Lebanon after the 2005 assassination of Rafik al-Hariri, Saad’s father.

Hezbollah’s big allies include the Shi’ite Amal Movement, led by Parliament Speaker Nabih Berri, and the Christian Free Patriotic Movement of President Michel Aoun, a Hezbollah ally since 2006 who has said its arsenal is needed to defend Lebanon.

While Hezbollah and its allies do not always see eye to eye, their support for its arsenal is vital to the group in Lebanon, where its weapons have been a major point of friction for years.

Hezbollah lost ground in the Baalbek-Hermel constituency, one of its strongholds. Two of 10 seats there were won by its opponents, one by the Lebanese Forces and the other by Future. It also failed to take a Shi’ite seat in Byblos.

Turnout was 49.2 per cent, down from 54 per cent the last time legislative elections were held nine years ago.

An independent candidate running against the political establishment won a seat in Beirut.

An anti-Hezbollah coalition led by Hariri and backed by Saudi Arabia won a majority in parliament in 2009. But that “March 14” alliance disintegrated and Riyadh has switched its attention to confronting Iran in other parts of the region, notably Yemen.

Samir Geagea, the Lebanese Forces leader, said the results showed there was still a “popular ground” that backs “March 14” and would “give us strength… to fix the path much more than we were able to in past years”.

Geagea is Hezbollah’s most prominent Lebanese Christian opponent. He led the Lebanese Forces militia in the last years of the civil war, during which he was an adversary of Aoun.

Hariri has urged the quick formation of a government after the election so it can press ahead with reforms needed to reduce state debt levels, among the highest in the world.

He said the international community should look at the election result “in a very positive way”.

Donors want to see reforms before they release some of the $11bn of aid and soft loans pledged in April.

Lebanon has been a big recipient of foreign aid to help it cope with hosting one million refugees from neighbouring Syria.

Nasrallah called for the quick formation of a new government and said it should be done in a spirit of cooperation, putting aside differences.

The question of Hezbollah’s weapons has slipped down on Lebanon’s political agenda in recent years. Hariri, who led years of political conflict with the group, says it is an issue to be resolved regionally through dialogue.

The Lebanon vote is to be followed on May 12 by an Iraqi election that is also set to underline Iran’s reach, with one of three pro-Tehran Shi’ite leaders set to become prime minister.

Iran said it respected Lebanon’s election, while France said the vote was an important step.