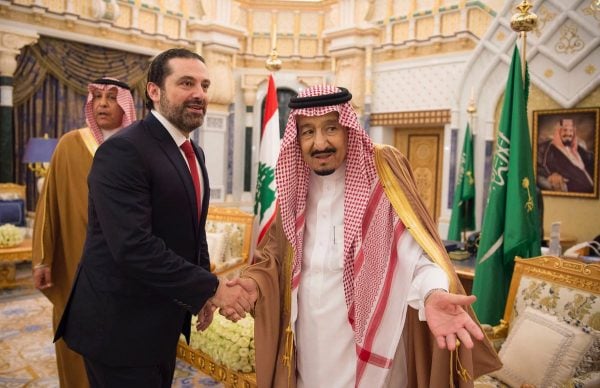 Lebanese Prime Minister Saad al-Hariri visited Saudi Arabia on Wednesday for the first time since his abrupt resignation during a visit there in November set off a major political crisis.

Lebanese officials said at the time that Riyadh had forced its long-time ally Hariri to quit and put him under house arrest because it had lost patience with his political accommodation with the Iran-backed Lebanese Shi’ite Muslim group Hezbollah.

Following French intervention, Hariri came back to Beirut and withdrew his resignation, drawing a line under the crisis that had raised fears for Lebanon’s stability and thrust it to the forefront of Riyadh’s regional tussle with Iran.

Hariri, whose coalition government includes Hezbollah, flew to Saudi Arabia late on Tuesday, taking up an invitation from King Salman that was delivered to him by a Saudi envoy in Beirut on Monday.

Photos and videos circulated of the king and Hariri drinking coffee and smiling in the royal al-Yamama palace.

Hariri became prime minister in 2016 in a political deal that made Hezbollah ally Michel Aoun head of state.

“It is clear that the Lebanese file has changed in Saudi Arabia. They were saying to Saad al-Hariri that because you have a deal with Michel Aoun … and part of Hezbollah in the government, you must resign,” a source close to Hariri said.

“They have reviewed their calculations with regards to their policy towards Lebanon, and their view that Saad al-Hariri must wage a military war against Hezbollah, or will otherwise be persona non grata,” the source added.

The meeting was attended by Saudi minister of interior Prince Abdulaziz bin Saud bin Nayef and foreign minister Adel Jubeir, amongst others, SPA reported. It did not say if Crown Prince Mohammed bin Salman was present.

Western officials have privately criticised Saudi Arabia over the move against Hariri, which they feared could destabilise a country that is hosting some 1.5 million refugees from the conflict in neighbouring Syria.

The Washington Post said on Wednesday Crown Prince Mohammed bin Salman complained he had been unfairly criticised over Hariri’s resignation. “Now he’s in a better position,” the newspaper quoted the crown prince as saying.

After his return, Hariri’s coalition government, which includes Hezbollah, reaffirmed a state policy of staying out of conflicts in the Arab world.

Riyadh accuses the heavily armed Hezbollah of waging war across the Middle East as agents of Iran, notably in Yemen which neighbours Saudi Arabia and is seen as the biggest security concern for the conservative Sunni monarchy.

Lebanon declared its policy of “dissociation” in 2012 to keep the deeply divided state out of regional conflicts such as the war in neighbouring Syria.

Lebanese Parliament Speaker Nabih Berri, also a Hezbollah ally, said he had heard “very positive talk” from the Saudi envoy Nizar al-Aloula about Lebanon and “its historical and civilised role” during his visit to Beirut this week, a statement from Berri’s office said.