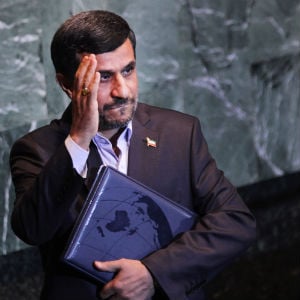 Gulf Arab states plan to meet next week to discuss a territorial dispute between the UAE and Iran which flared after the Iranian president visited a tiny Gulf island that both claim, a source familiar with the matter said on Saturday.

The UAE recalled its ambassador from Tehran on Wednesday after Mahmoud Ahmadinejad visited Abu Musa island, 60 km (40 miles) off the UAE as part of a tour of Iran’s Gulf coast.

Ahmadinejad’s visit “is a flagrant violation of the UAE’ sovereignty over its territory,” UAE Foreign Minister Sheikh Abdullah bin Zayed al-Nahayan was quoted as saying by state news agency WAM on Wednesday.

A meeting of foreign ministers of the Gulf Cooperation Council will be held on Wednesday in the Saudi capital Riyadh, the source told Reuters.

“This will be an extraordinary meeting which was called for by the UAE following Mahmoud Ahmadinejad’s visit,” the source added.

Both countries claim Abu Musa and two other small islands, located near key shipping lanes in the Strait of Hormuz at the mouth of the Gulf. Iran took control of the islands in 1971, shortly before the Gulf emirates formed the UAE.

The islands are valued for their strategic position in the Strait and for their potential oil reserves.

The UAE also cancelled a friendly match with Iran’s national soccer team, due to be held on Tuesday in the Gulf Arab state, in protest against Ahmadinejad’s visit.

Iran said Ahmadinejad’s visit was an “internal Iranian matter”. Tehran said it was determined to improve bilateral ties and was ready for a dialogue with the UAE to resolve “possible misunderstandings”.

The UAE has urged Tehran to agree to take the dispute to the International Court of Justice in The Hague or to hold direct negotiations but Iran says its sovereignty over the islands is not negotiable.