Airlines in the GCC are expected to face a major impact from the growing crisis in the region, analysts opine.

Saudi Arabia, the UAE, Bahrain and other Arab states such as Egypt severed all ties with Qatar on Monday, blaming the GCC state of supporting terrorist groups and backing Iran.

The three GCC states cut all air, sea and land links with Qatar, with airlines from the UAE, Saudi and Bahrain immediately suspending operations to Doha.

Qatar Airways, which also suspended flights to all the three GCC states, has also been forced to shut down its offices in Saudi, Bahrain and the UAE.

“Obviously the likes of flydubai, Air Arabia, flynas and others will be feeling the pinch due to the lack of flights to Doha, which was a popular route for them all,” opined Saj Ahmad, chief analyst at StrategicAero Research.

“However, the likes of flydubai and Air Arabia have such huge networks, they can easily offset this capacity to other destinations with relative ease,” he said.

“Saudi carrier Flynas will have it harder given its smaller network and in a way was very reliant on Saudi-Qatar demand. How they cope with the fallout is far from clear and they too will be directly financially wounded here, whether they admit it or not.”

But the ban on flights will be felt the strongest by Qatar Airways, which operates more flights than all the other airlines combined.

“The loss of access to the local Saudi and UAE markets is significant, irrespective of transit/overflying access. Saudi and the UAE are Qatar Airways’ two single largest markets – bigger than even India,” the CAPA report said.

With Qantas now announcing a ban on Qatari passengers flying via Dubai, the likelihood is that many transit passengers will avoid Qatar Airways completely, explained Ahmad.

“This will of course mean long haul fare payers providing a much needed revenue boost to offset those flights by Emirates/Etihad that have now stopped serving Doha,” he added.

Meanwhile the shutting down of Qatar Airways’ offices in Saudi Arabia, Bahrain and the UAE also “definitely signals that this spat is going to last a long time”, he opined.

“You don’t shut down offices and revoke licences if you expect some sort of near term resolution. By this move, it’s clear that the coordinated efforts by Saudi Arabia, UAE and Bahrain implies that they are more than prepared to isolate Qatar for the long term – and this will be very crippling to Qatar Airways in terms of fleet operations,” he said.

“Not only will jets have to fly longer and further, costing more time and fuel, but its regional fleet of A320s will end up being parked – another cost. They can’t redeploy these on longer missions as they do not have capacity or range.”

Another major move by Saudi has been to ban all Qatari private and commercial aeroplanes from crossing its airspace. But Bahrain and the UAE, signatories to the Transit Agreement – have so far only closed airspace for flights landing and taking off between their respective countries and Qatar.

Qatar has very little airspace and is largely surrounded by Bahrain airspace, according to CAPA analysis. A slither on the south is managed by Saudi Arabia while the UAE is on the eastern border.

“Losing Saudi airspace is significant, but even worse would be losing Bahrain airspace since it practically encircles Qatar,” the CAPA report explained.

“Most Qatar Airways flights to Europe can (and prior to the airspace ban, did) track north of Saudi Arabia. Closing of Saudi airspace requires timely and costly diversions to other Middle East destinations as well as to most of Africa. Losing Saudi, Bahrain and UAE airspace would effectively ground Qatar Airways save for any fifth freedom services,” it added.

If GCC member Oman, which has remained neutral so far, joins Saudi, UAE and Bahrain in severing ties with Qatar, the airline could face even more pressure. 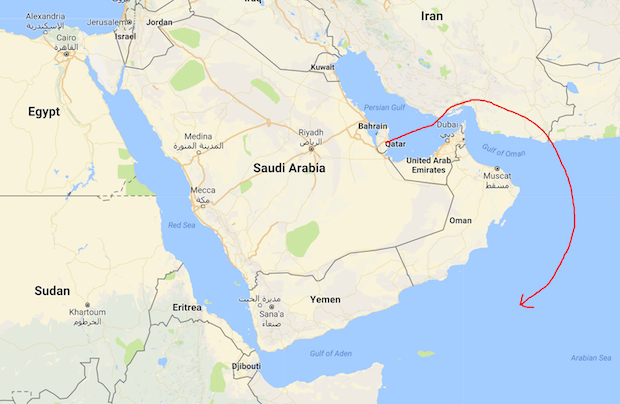 “The airline would have to fly so far around the GCC ocean to head back inland, that aeroplanes like the small A320 would likely have to sacrifice passengers for more fuel, rendering viability almost impossible.”

It is hard to predict when the issue may be resolved, but the regional aviation industry is bound to face repercussions, said CAPA.

“Amidst growing security concerns and the existing laptop ban, passengers are unlikely to dig in to the reason for this ban. Gulf aviation becomes less attractive for all,” it said.

“Uncertainty continues to pervade the industry in 2017,” it added.