A total of four IPOs were issued in the third quarter of the year, up marginally compared to the previous quarter, when three listings took place, according to the latest report from PwC.

Tadawul remained the dominant exchange in the GCC in terms of IPO proceeds, raising $110m via two IPOs, comprising 79 per cent of the total IPO proceeds in Q3 2017. The largest IPO during the quarter was by Zahrat Al Waha Trading, which raised $61.2m, with the second largest from Al Maather REIT Fund raising $49.1m.

The other two IPOs in the third quarter were listed on the Muscat securities Market – the stock exchange’s first offerings since June 2015. The two offerings – one from Al Ahlia Insurance and another from Vision Insurance – raised $30m, comprising 21 per cent of total IPO proceeds during Q3. 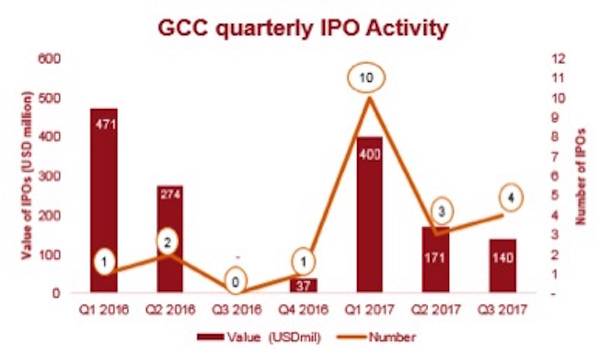 So far this year, the GCC region has seen 17 IPOs compared to four over the same period in 2016.

However, proceeds raised year-to-date are 4 per cent lower compared to the same period in 2016, despite the increased number of IPOs.

This is mainly due to the low value of IPOs listed on Saudi’s Nomu parallel market in this year, said PwC.

“We are seeing more and more companies engaging in IPO readiness activities, preparing themselves and getting ready for the right window. We expect to see companies go to market during 2018.”