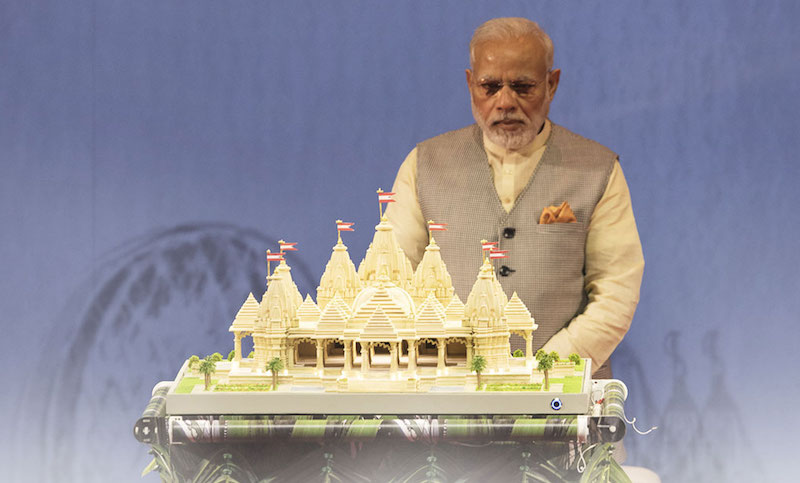 Work on the first Hindu temple in Abu Dhabi is progressing with the foundation stone-laying ceremony set to be held on April 20, local daily Gulf News reported.

The organisation building the temple, the Bochasanwasi Akshar Purushottam Sanstha (BAPS), confirmed that its spiritual leader Mahant Swami Maharaj will preside over the event.

The temple – estimated to cost Dhs400m-Dhs450m, is being built on land donated by the Abu Dhabi government during a visit by Indian Prime Minister Narendra Modi in 2016.

The ground-breaking ceremony for the temple, located near Al Rahba off the Dubai-Abu Dhabi highway, was held a year ago.

The temple is being built on 55,000 square metres of land, and this year, to mark the UAE’s Year of Tolerance, the government has gifted another 55,000 sqm for parking facilities.

The structure, featuring seven spires and five ornate domes will be entirely sculpted from stone by hundreds of artisans in India. Once ready and numbered, thousands of such stone pieces will be shipped to the UAE and assembled on site like a giant 3D jigsaw puzzle.

According to its website, the temple will include a visitor centre, prayer halls, exhibitions. learning halls, play areas for children, garden and water features, books and gifts shop, and a vegetarian food court.

Currently, the finer details of the building’s design are being finalised, officials said.

Construction is slated to begin this year.

Last year, officials had said they were targeting completion in 2020.