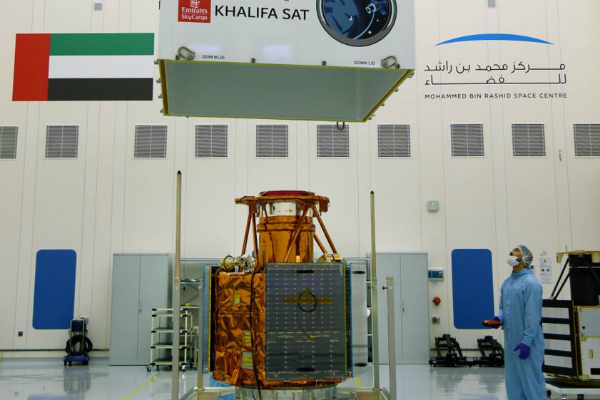 The first satellite developed and built in the UAE by Emirati engineers has been transported from Dubai to South Korea’s Incheon International Airport in anticipation of its launch.

KhalifaSat, a Mohammed bin Rashid Space Centre (MBRSC) project launched in 2013, was transported to the Emirates SkyCentral freighter terminal at Dubai World Central in a specially branded truck with a police escort following months of planning.

It was then loaded onto a specially chartered Emirates SkyCargo Boeing 777 freighter aircraft.

KhalifaSat, the first satellite developed and built by Emirati engineers in the UAE at @MBRSpaceCentre was transported to South Korea on an @emirates SkyCargo Boeing 777 freighter aircraft. It is a unique honour to be part of this historic and momentous occasion. pic.twitter.com/3k9Hoo2LQs

Following its launch the KhalifaSat will be used to provide images of earth for practical applications in disaster relief management, urban planning and environmental protection, among other uses.

“It has been a journey of nearly five years from the time the Mohammed Bin Rashid Space Centre commenced the manufacture of KhalifaSat to now where we’re getting ready for the final launch,” said MBRSC assistant director general for scientific and technical affairs Salem Al Marri.

“We needed a partner who had the capability and expertise to transport KhalifaSat from Dubai without compromising its sensitive instrumentation and components.”

The organisation worked with Emirates SkyCargo from November 2017 for the transportation project, including a number of trial loading exercises.