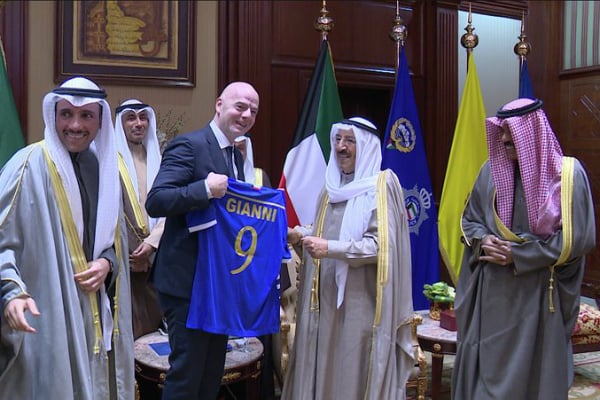 The international football federation, FIFA, has lifted a two-year suspension against Kuwait’s football association that has prevented the country from participating in international tournaments.

FIFA president Gianna Infantino confirmed the move in a video posted on the Instagram account of Kuwait’s minister of trade and industry and acting minister of youth affairs Khaled Al-Roudhan.

It was later reiterated in a statement by Infantino during a meeting with Kuwait’s Emir Sheikh Sabah Al-Ahmad Al-Jaber Al-Sabah.

“I would like to reiterate to his highness that the FIFA Council unanimously decided at its meeting to lift the suspension from Kuwait,” he was quoted as saying by state news agency KUNA.

“We have done many things but this is the beginning of a new phase.”

The lifting of the suspension came after the Kuwaiti parliament agreed on Sunday to amend sports laws in a bid to end the suspension of the country’s sports teams from international competitions by FIFA and the International Olympic Committee.

The ban proved so controversial that it led to the resignation of former minister of information and youth Sheikh Salman Humoud Al-Sabah in February ahead of a no confidence vote against him by the country’s parliament.

Read: Kuwait minister resigns ahead of no confidence vote over sports ban – report

The country was also banned from international competitions by FIFA over alleged interference in the national football association.

The ban meant Kuwait missed out on its first gold medal when Fehaid Aldeehani won the men’s double trap event at the Rio 2016 Summer Olympics.