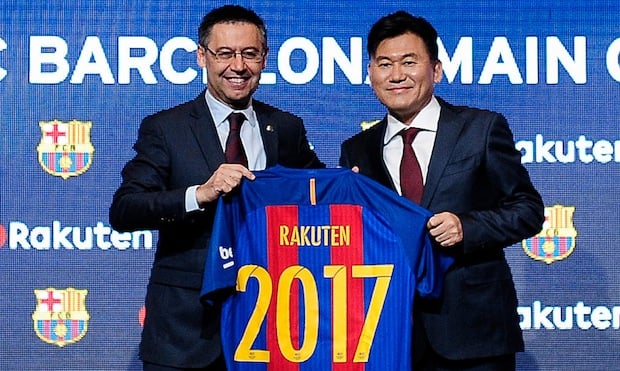 FC Barcelona kits will not feature the logo of Qatar Airways from the 2017-2018 season.

The club signed on a new sponsorship deal with Japanese online retailer Rakuten, it announced on Wednesday.

Barcelona vice president Manel Arroyo confirmed that it is a four-year deal, which will begin at the start of the 2017-18 campaign and end after the 2020-21 season.

“In addition Barca will play at least one friendly game in Japan watch year, with the possibility of two if the calendar permits.”

Rakuten CEO Hiroshi Mikitani added: “We love sports. We have a professional baseball team, a Japanese professional football team and we sponsor the only ATP tennis tournament in Japan.

“We intend to not only become a sponsor, but to do a lot more to help Barcelona as a global innovation and entertainment partner.”

The new deal – one of the largest for shirt sponsorship – ends Barcelona’s long partnership with Qatar Airways, which was extended for a year in July.

Barcelona’s previous deal with Qatar Airways, signed three years ago, was reportedly worth approximately $40m per year and expired in June.

The club initially entered into a $230m five-year agreement with sovereign wealth fund Qatar Sports Investments in 2011, marking the first time that a paid sponsor’s logo appeared on the team’s shirts in 111 years.