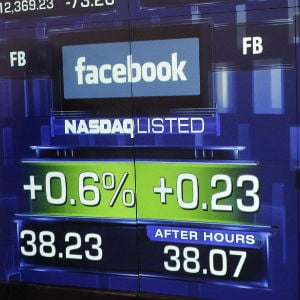 Facebook’s much-hyped IPO fell flat on opening day, with shares closing only 23 cents above their opening price of $38, valuing the company at $104.2 billion.

It was a disappointing end to day one for Facebook’s banks, who ended up owning 86 per cent of the social networking site’s IPO.

According to a filing made with the US Securities and Exchange Commission, Facebook’s five main banks Morgan Stanley, JP Morgan, Goldman Sachs, Bank of America Merrill Lynch and Barclays Capital now own $13.86 billion worth of the company’s shares.

Just last week, the company had raised its target price range from $28-$35 per share to $34-$38, because it had assumed strong investor demand.

However the dull opening of the IPO was contrary to what many hoped and predicted.

Over 2,260 people predicted an average closing share price of $54 on the site www.facebookipodayclosingprice.com, which gathered predictions from people across the world.

The firm created a database of 160 Facebook employees, investors and other beneficiaries to find out the information.

Despite the global hype surrounding the IPO, Matein Khalid, fund manager in a royal investment office in the UAE, had predicted earlier this year that it was not a good idea to invest in the social networking site’s IPO.

“The Facebook IPO will culminate in a social media bubble that will then pop with a vengeance and Zuckerberg’s digital empire could fall 60 per cent from its IPO price,” he wrote in an opinion piece on Gulf Business.

Now that the launch hype has faded, regular market trading will determine whether Facebook, which boasts over 900 million users, will create millionaires or not.