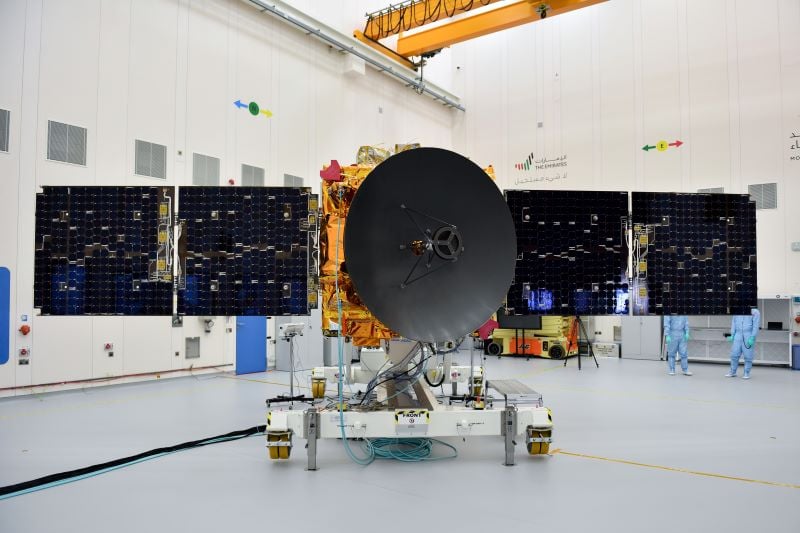 The Dubai-based space mission’s control team is collaborating with the launch team in Japan out of the Mohammed bin Rashid Space Centre (MBRSC). The team in Japan will be joined by Emirati engineers and experts scheduled to manage and oversee the launch.

The journey of transferring the Hope Probe from Dubai to the launch site in Tanegashima Island in Japan staggered across more than 83 hours and underwent three stages.

The launch is scheduled for Wednesday, July 15, 2020 at 12.51am UAE time from the Tanegashima Space Centre.

The unmanned probe is expected to enter Mars’ orbit on February 2021. The Hope Probe is currently undergoing extensive testing operations in Japan while a team of  Emirati engineers are currently supervising the probe’s pre-launch preparations.

The Emirates Mars Mission, the Arab world’s first interplanetary mission, seeks to establish the UAE’s entry into the space industry, further its capabilities in space science and engineering, and develop local talent.

“The Hope Probe embodies the culture of possibilities deeply rooted in the UAE’s approach, philosophy and journey of accelerating development since the foundation,” said Sheikh Mohammed.

“Our journey to space represents a message of hope to every Arab citizen that we have the innovation, resilience and efforts to compete with the greatest of nations in the race for knowledge.”

.@HHShkMohd: The #UAE’s launch of the Hope Probe to Mars in two weeks will be a watershed moment between two important time periods for our country, 50 years ago and 50 years to come. pic.twitter.com/EyrFtRcjaV

“Despite challenges posed by the coronavirus pandemic, we remained committed to our plans to meet the launch schedule of the historic space mission, in efforts have truly reflected the UAE’s slogan that the impossible is possible.”