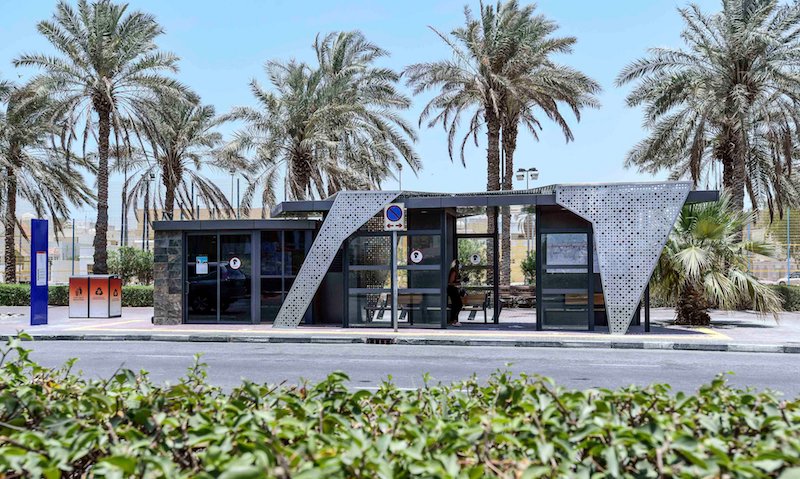 Dubai’s Roads and Transport Authority (RTA) has unveiled its new generation of bus shelters at four locations within the emirate, built in association with the private sector.

They are currently located at a main bus stop nearby Satwa Roundabout (2nd December Street); at a secondary bus stop at Burj Khalifa Boulevard (near the Boulevard Walk); at a key stop at Al Mustaqbal Street (near Park Towers); and one more at a pick-up and drop-off stop on Al Mustaqbal Street behind Emirates Towers.

The RTA has said that it would construct 1,550 such bus shelters over the next 3-4 years.

“The project is being undertaken in partnership with the private sector through Build–Operate–Transfer (BOT) Model. The investor shall cater to the funding of construction and operation of shelters, and share the proceeds of advertisements with RTA under a 12-year contract,” said Mattar Al Tayer, director-general and chairman of the Board of Executive Directors of RTA.

.@rta_dubai unleashes a new generation of bus shelters at four hotspots across #Dubai. It is the first batch under a plan for constructing 1550 shelters for waiting bus riders set to be constructed over 3-4 years. https://t.co/VlduS9FgxQ pic.twitter.com/KAtp1ojjHZ

The shelters will be partially air-conditioned, with the remaining area shaded.

In addition to a space for branding, the shelters will also have informational screens displaying bus network, timetable, service frequency and other information needed by commuters, added a statement by Dubai Media Office. There will be spaces dedicated to parking bikes as well as a provision for ticket vending machines.

Unleashing the new generation of bus shelters at four Dubai hotspots, the new design of bus shelters is part of a package of vital projects endorsed by HH Sheikh Mohammed bin Rashid Al Maktoum that bolster the image of #Dubai as a perfect city for stable and safe living. #RTA pic.twitter.com/T8GSo9Lhat

These new bus shelters will also be accessible by people of determination. “The design of the new bus shelters conforms to Dubai Code for People of Determination as they make room for wheelchairs and tracks for visually challenged individuals. It consolidates ‘My Community…A City for Everyone‘ initiative of Sheikh Hamdan bin Mohammed bin Rashid Al Maktoum, Dubai Crown Prince and Chairman of the Executive Council, aimed at transforming the entire Dubai into a friendly city for people of determination by 2020.”