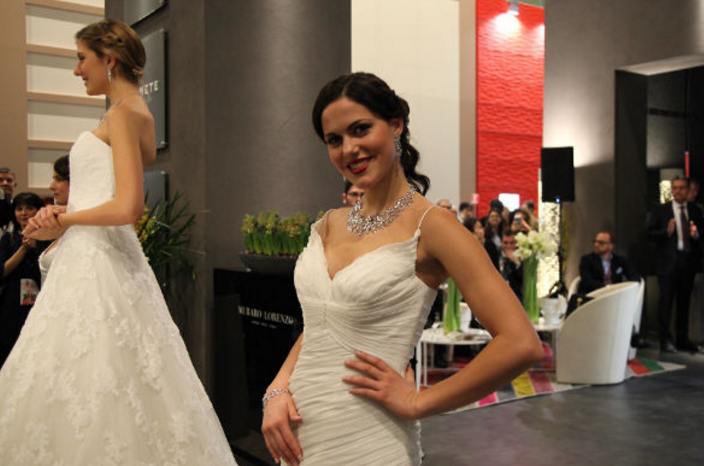 Every winter, an industrial estate on the outskirts of the Italian city of Vicenza becomes the unusual host for the world of jewellery.

This year, the opening event on the jewellery calendar, Vicenzaoro January, took place amid the bitter chill of plunging stock and commodity prices and an uncertain outlook for global consumer demand.

“We are paying a lot of attention to what will happen in 2016 because luxury and jewellery itself may be under pressure,” says event organiser Fiera De Vicenza’s managing director Corrado Facco.

But if the climate has proven chilly back home, where many European markets are still in recovery mode from the recession, Italian jewellers are looking to the warmer temperatures of the Gulf with optimism.

“Europe is the traditional market but in recent years there have been a lot of problems with the business because the economy is very difficult,” says handcrafted jeweler Scanavin’s co-founder Roberta Scanavin. “And so the major market [for us] is the Arabian market.”

Scanavin is one of a number of Italian firms that has tapped into the regional demand for luxury.

“If we see the figures, more than .6bn($6.6bn) was exported by Italian jewelers around the world and again the first market was Dubai,” says Facco.

The Italian event organiser is now hoping to capitalise on this demand as Dubai looks to put itself on the global jewellery map.

The jewellery capital of the world

Dubai’s appeal for Italian jewelers has been longstanding, according to Facco.“In the last five years Dubai itself was and is the most important market for the Italian exporters in terms of jewellery,”he says.

It was with this in mind that his organisation approached Dubai World Trade Centre three years ago with the intention of creating the region’s largest business-to-business jewellery trade show.

“When we discussed with Mr Almarri, the CEO of World Trade Centre, he was very clear. He said ‘we are choosing you to make a joint venture because you are number one in Europe and we want to be number one on

The resulting joint venture, DV Global Link, launched Vicenzaoro Dubai last year and the show will return in April with lofty ambitions to become the Baselworld of the Middle East.

However, both Vicenzaoro and the emirate still have some way to go in achieving their goals.

Dubai accounted for 30 per cent of the luxury market in the Middle East in 2014, according to management consultancy Bain & Company. But the regional sale of personal luxury goods, including jewellery, is still far from world beating at $8.9bn last year compared to $86.6bn in the United States, the consultancy estimates. When ranked by city, Dubai stood alongside Moscow and Miami with $3.3bn of luxury sales estimated in 2015 compared to $29.7bn in New York and around $14.3bn in London and Paris.

Equally Vicenzaoro Dubai will be hard pressed, at least to begin with, to reach the scale of industry heavyweight Baselworld, which attracted 150,000 attendees last year. A target to become one of the top five dates for the international jewellery and goldsmith sectors by 2020 seems more realistic.

In the meantime, jewellers see the potential for Dubai to become an important stepping-stone to other markets.

Scanavin, which creates exclusive collections for a partner in the GCC, says it plans to use the emirate as a springboard to do business with companies in Africa.

“For the moment they are closed because they come only in Dubai to find the product. And so it is important for us to be there,” she says.

The company is also eyeing opportunities in Iran, Lebanon, Libya and Iraq should stability improve. “If the political problems are resolved I think we have a big opportunity to sell more.”

Many others, like Nanis Italian Jewels, are also seeing potential in the GCC market. The company has operated in the region for more than 10 years through a partnership with Saudi Arabia’s Al Moallim.

“It is a market that is receptive, they are very fashionable and they like the concept of Nanis which is a higher level of craftsmanship but very playful,” says the company’s designer Laura Bicego. She says women in the region are sometimes more receptive to fashion trends than those in the US and have a different attitude to purchases than in other parts of the world.

The company is particularly focused on Saudi Arabia and Kuwait, where a local partner is reopening a store.

Looking to the year ahead, the outlook for the regional jewellery market is mixed.

In a February report, Dubai Gold & Jewellery Group chairman Tawhid Abdullah said gold sales in the emirate grew about 5 per cent to Dhs 14bn last year. He predicted jewellery sales could rise by another 5 per cent this year.

But there were signs of a slowdown in a fourth quarter when gold jewellery sales fell by 5 per cent in the Middle East, according to the World Gold Council. This included 4 per cent, 3 per cent and 5 per reductions in Saudi Arabia, the United Arab Emirates and Kuwait respectively.

“Unsurprisingly, further falls in the price of oil and continued confl ict across the region have fed through to declines in gold jewellery consumption. Declining tourist revenue was an added factor in the UAE,” the organisation notes.

“In spite of signs of a softening economy and tourism in the region, we are expecting a stronger and more mature exhibition event in Dubai,” he says.

Jewellers will be hoping this optimism is proven right as the industry continues to tackle global headwinds.