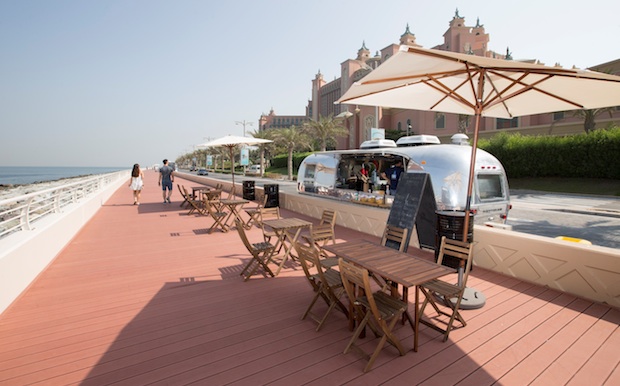 Developer Nakheel has opened its Dhs150m Boardwalk at Palm Jumeirah in Dubai.

The 11 kilometre Boardwalk was created by building out over the rocks of the island’s protective breakwater to produce a six metre wide promenade.

It is accessible from 14 points along the crescent of the Palm.

The promenade features facilities for fitness, leisure and socialising, including many food trucks, some of which are open for business.

Nakheel chairman Ali Rashid Lootah said: “This unique destination is one of a series of new projects under way on the island as part of our ongoing commitment to further enhance this world-famous landmark.

“It’s already proving a popular spot for jogging, walking and sightseeing among both residents and tourists, with many more visitors expected as Dubai’s peak tourist season gets under way.”

Nakheel is focussed on developing its hospitality and retail business and recently unveiled the Dhs120m Club Vista Mare project – also in Palm Jumeirah.

The project includes seven upscale cafes and restaurants offering a variety of cuisine.

The company’s other projects on the Palm, including The Pointe Mall and Nakheel Mall are proceeding as scheduled, he said.

The company is also holding negotiations with hotel operators for its recently launched Palm 360 project.

The twin-tower hotel and residential project is set to be developed 220 metres above Palm Jumeirah and will offer all-round views of the island, the sea and the Dubai skyline.