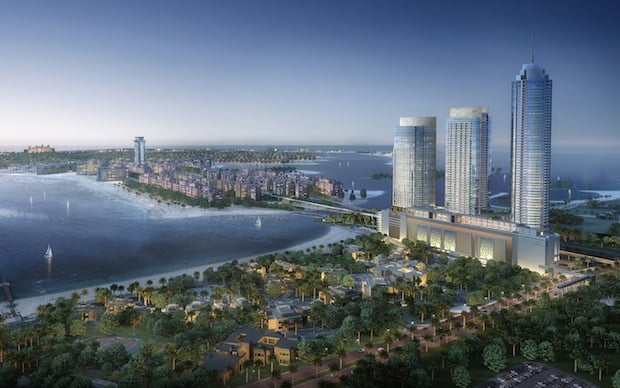 Dubai developer Nakheel has signed a construction contract worth nearly Dhs1.5bn for its Palm Gateway project at Palm Jumeirah.

Construction on the three-tower residential, retail and beach club complex will be undertaken by Shapoorji Pallonji Mideast, a statement said.

Last year, the company had awarded a contract worth nearly Dhs1.4bn for the project to Ssangyong Engineering & Construction Co (Dubai Branch) and China State Construction Engineering Corporation (Middle East). However, it has now been re-tendered, a spokesperson confirmed.

Work will now begin in Q2 2017 and take two and a half years to complete, the statement added.

The project includes 1,265 luxury apartments across three high-rise buildings to be constructed on top of the existing Palm Monorail terminal, which includes 14 levels of parking spaces.

Units range from one to three bedrooms and will be available on lease.

Spread across 5.5 million sq ft, it will also have its own beach club and park with dining options, barbecue areas and fitness facilities, including a jogging track.

The 15th floor will be a podium deck with a pool, sports courts and 8,600 sq ft of retail space. Residents will also have access to a supermarket and food court within the podium building.

The Palm Monorail will remain operational throughout the construction of the project, Nakheel added.

Originally launched in 2008, the Palm Gateway project was scheduled to be completed in 2011. But it was shelved after the property crash and relaunched in 2014.

Currently, the Palm Gateway is one of three high rise developments being developed by Nakheel on Palm Jumeirah.

The Palm Tower, a 52-storey luxury hotel and residential complex at the centre of the island is under construction, while Palm 360, a 220 metre twin-tower penthouse, apartment and hotel complex, is currently being designed.

Nakheel chairman Ali Rashid Lootah said: “The Palm Gateway contract is among Dhs12bn worth of construction contracts to be awarded by Nakheel this year.”

The company awarded construction contracts worth Dhs5bn in the first quarter of the year.

Currently, Nakheel has four million square feet of retail space in operation with another 13 million sq ft under development. Two Nakheel hotels are operational with 16 more under way, and its residential leasing portfolio is set to double to over 35,000 units under ongoing expansion plans.