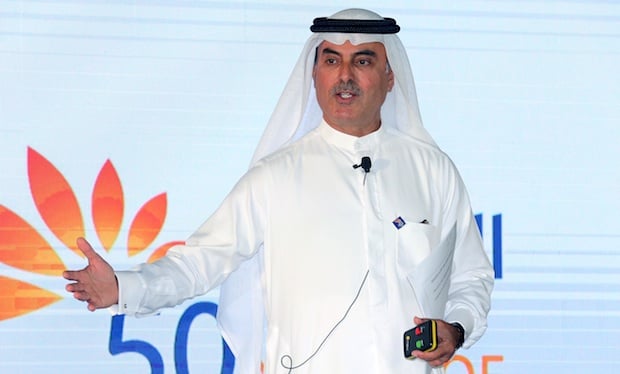 Speaking to reporters, Al Ghurair said the new lender would provide all the regular banking services but have “no branches”.

“It can exist anywhere – there will be no boundaries,” he said.

“In the future, we don’t know if there will be a role for a bank branch as 95 per cent of the services will be done outside the branch,” he added.

The bank is expected to be launched in July. No further details were disclosed.

The move comes even as other Dubai-based lenders including Emirates NBD and Commercial Bank of Dubai (CBD) have launched similar digital-only banks targetting millennials.

Al Ghurair stressed that the regional banking industry would see “dramatic changes” in the next five years mainly due to technological disruptions.

“Factors like blockchain, artificial intelligence, robotics and data mining will be the major trends going forward, which will completely change the way we work,” he said.

“Banks don’t have a choice – if they don’t participate and adopt new technologies, they will miss out.”

Mashreq, which is marking its 50th anniversary this year, has already “eliminated” several repetitive processes conducted by individuals.

“Machines will replace lots of processes and jobs. Currently 80 per cent of our staff are doing back office roles, but their jobs will be eliminated over time,” said Al Ghurair.

“It puts more pressure on universities to prepare graduates who will be able to perform more analytical tasks,” he added.

The bank, which started out with around 10 employees in 1967 as the Bank of Oman, currently employs around 5,000 people across the board.

According to the veteran banker, Mashreq has managed to post a profit every year since its launch, and has grown its capital from Dhs6m to Dhs19bn at present.

Currently, it has 70 branches across 12 countries, and will continue to expand into regions such as Kuwait and Egypt where the UAE has strong trade and investment links.

“Our aspiration going forward is not to be the biggest bank but to be more progressive and innovative,” said Al Ghurair.

The UAE and the overall GCC’s banking sector has seen several merger discussions in recent months.

In Saudi Arabia, talks are on for a merger between Alawwal Bank and Saudi British Bank.

Earlier this month, Saudi’s central bank governor Ahmed al-Kholifey said that he did not see more bank mergers looming in the kingdom.

But in the UAE, which has 49 local and international banks employing about 36,958 people, more lenders could look at merging operations, said Al Ghurair.

“In some of the cases there is duplication. Because possibly if one bank has given a loan of half a billion to a customer and the other bank has also done the same, it becomes a loan of one billion which poses a higher risk.

“In mergers that is a threat – if you have common customers it’s not good,” Al Ghurair explained.

“But you can also eliminate back office processes and a lot of redundancy through a merger. Some of the banks that are merging now – they are going to close branches because they are located next to each other and it doesn’t make sense to have two branches of the same bank at the same location.”

He added: “Everything is possible. The UAE is a dynamic market and so you should expect anything and everything.”