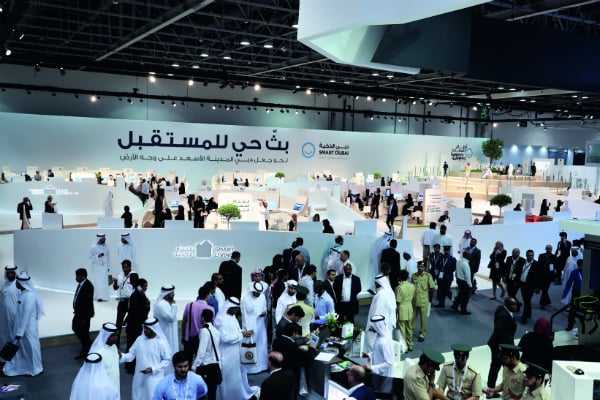 As usual, this year’s GITEX Technology Week in Dubai was a showcase of the latest and greatest innovations from the world over.

There was also much attention on the drone taxi service the emirate’s Roads and Transport Authority (RTA) is testing with manufacturer Volocopter, and new smart tunnels expected to reduce wait times for passport control procedures at Dubai’s airports to just 15 seconds. Not to mention Hong Kong-based TCL Communication’s decision to unveil its latest Blackberry smartphone, the Blackberry Motion, to the world at GITEX this year following big interest in its previous KeyOne device.

However, it was perhaps the less extravagant announcements related to smart and digital services that served as a true indication of the emirate’s progress towards becoming a technology hub.

Among the key showcases in this area was a smart-decision-making platform unveiled by Smart Dubai. The new platform relies on a data aggregator that forms the platform for Dubai’s transition into a smart city and was used to offer a glimpse of the future.

“The beauty of this room is not only the technology per say, it’s the unification of all the city data that will allow any decision maker – whether it be a city planner or entrepreneur or home seeker in the city – to make a mindful decision,” says Dr Aisha Bin Bishr, director general of the Smart Dubai Office.

The platform forms part of wider approach by the city to digitalise key services and even the identity and documentation of citizens and residents, and there was progress on display in several areas.

Among the most immediate to make an impact will be a new mobility app from the RTA dubbed S’hai that will allow customers to book and pay for all of Dubai’s transport options through a single platform including metro, tram, bus, waterbus, taxi, e-Hail, Uber and Careem sevices. Other projects from the authority like a smart crossing system to allow pedestrians time to cross the road and an updated drivers and vehicles app integrated with the Salik road toll system are also set to improve the lives of residents in the coming months.

Elsewhere, a blockchain database system launched by Dubai Land Department will record all real estate contracts, including lease registrations, and link them with Dubai Electricity and Water Authority (DEWA), the telecommunications system and various property related billing systems to simplify the process of renting in the emirate. The first phase will see the building of a personal tenant database using Emirates ID cards and residency visas to allow renters to make payments electronically without the need to write cheques, print papers or visit a government entity.

Bishr says the eventual goal is for any transaction or process involving a government department in the UAE to be digital, but one key hurdle that still needs to be addressed is buy-in from the courts and legal recognition of digitally signing a contract or invoice.

“We’re bringing many different departments with us, whether it be the court, financial institutes, developers and national institutes also – not only local government – so we can combine them all in one holistic platform so that tomorrow even digital signatory is approved by this,” she says.

Beyond the lofty goals of the government in Dubai, the private sector in the Gulf is embracing technology for different reasons, with a key emphasis on cost savings and efficiency.

“The expectation is we need to cut the spend. That’s the expectation of any strategic initiative of any organisation, small or medium or even a large enterprise. But at the same time growth is a critical element,” says Xerox UAE marketing manager Pankaj Kalra.

Indeed, a brief look through the numerous surveys and reports released around GITEX showed some of the impacts of a dip in economic sentiment in recent years related to the low oil price and other regional issues.

Technology research and consulting firm IDC said in its first half report covering the Middle East and Africa enterprise infrastructure hardware market, including servers and external storage, that spending was down 8 per cent year-on-year in the first half of 2017 to $1.1bn.

“I would say with all due respect to IDC that spending is being directed into new technologies which still in my opinion is IT,” says Dell Technologies infrastructure solutions manger for Middle East, Turkey, and Africa, Shams Hasan.

“It is very important to understand that traditional IT spending is decreasing but we as an organisation see that customers are spending even more in the totalitarian universe of technology.” 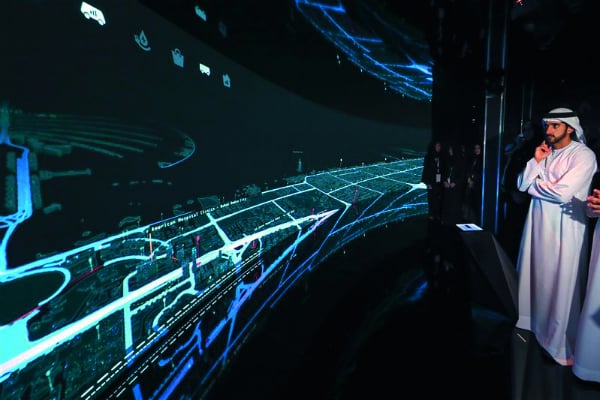 He suggests pressure to embrace digital and transform their business is leading regional firms to look at what technology needs to be retired or moved to emerging platforms, while demand for technology consulting is increasing as companies look to take their next step.

This in turn is translating into demand in areas deemed the components of digital transformation – namely cloud computing, artificial intelligence, the internet of things, big data analytics and robotic automation.

“Businesses in the gulf are deploying new storage infrastructure to further develop their data handling competences, and overall data management of internal business information,” he says.

“Additionally, they require vigorous back-up and recovery procedures, and systems that would benefit them to offer and deliver top-notch products and services to consumers.”

Sunil Paul, co-founder and COO of systems integrator Finesse, says priorities vary for companies in different sectors from blockchain and artificial intelligence chatbots for banks to automated customer relationship management and loyalty programmes for other enterprises.

“Digital transformation is not a solution or product it’s not something you can achieve by a programme so it is a journey. In this journey you will find there are various milestones, so this has to be continuous,” he explains.

“If you look at financial services they are possibly slightly ahead. The government, I can see from [Dubai ruler] Sheikh Mohammed’s initiatives that they are far ahead, but other industries are yet to catch up.”

He expects many regional firms that have not already started to, to embark on the first phase of digital transformation – cloud computing – in the next six to 18 months. Widespread adoption of other technologies like AI chat bots and digital-based response systems will likely take longer though, he suggests, and it could be five years before bitcoin database technology blockchain is widely used by companies in the region.

In contrast, other areas like cyber security are deemed a more pressing concern for regional firms.

A study released by Russia’s Kaspersky Lab revealed the costs involved with security breaches in the Middle East, South Africa and Turkey, with enterprises paying an average of $591,000 per incident and smaller companies $88,000.
Another survey of Middle Eastern firms with 250 or more employees by US company Fortinet showed 89 per cent had experienced a security breach and 69 per cent had increased their IT security budget from the previous year.

“There is a very real concern today technology-wise and a big emphasis [on security]. It’s the ‘on topic’ with governments and others,” says Alain Penel, regional vice president for the Middle East at Fortinet.

He suggests this concern has meant the sector has not been hit by spending cuts like other areas, with the company seeing “double-digit” sales growth. And further business is expected given the survey’s findings that 75 per cent of IT decision makers believe cloud adoption – and the security to support it is a growing priority for their boards.

“In today’s digital economy, I expect the trend we’ve seen at the board level to accelerate with security being treated as a top priority within an organisations’ broader risk management strategy,” he adds.

In other areas too, companies are presenting solutions in reaction to government regulation and initiatives.

Senior manager for business development Gururajan K expects demand for accounting software in particular to pickup as VAT forces small and medium enterprises to maintain their books to be compliant with the law, which comes into effect in the UAE on January 1.

“What happens is traditionally some of the businesses, especially for the small sector, they have not been maintaining their books or accounts in a proper manner,” he says.

“VAT is an enabler so that they are able to streamline their businesses and processes so they can have much better control of their whole operation.” 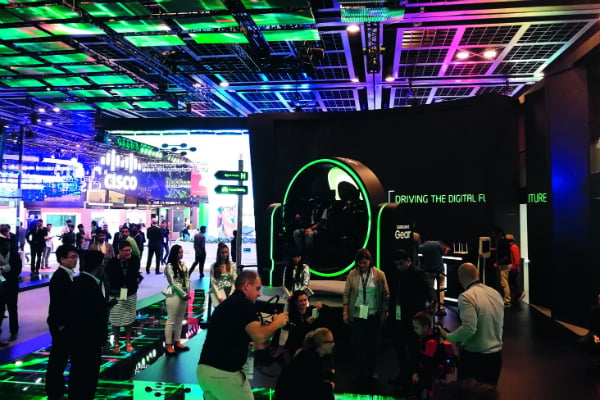 Elsewhere, Japan’s Smartmedical Corp sees potential in the use of its artificial intelligence emotion detector Empath as part of UAE Vice President, Prime Minister and Ruler of Dubai His Highness Sheikh Mohammed bin Rashid Al Maktoum’s initiative to make the UAE one of the happiest country’s in the world.

The company is collaborating with the Ministry of Interior and Smart Dubai to see how the technology can be used to measure the happiness of UAE citizens and residents in key areas.

“Smart Dubai office has already implemented their happiness metre along the metro stations, as you know. We think it’s a good solution to check happiness; however, it is not objective. It is a more subjective technology,” says project manager Hazumu Yamazaki.

The Smartmedical system is able to ascertain a person’s mood, regardless of the language, by the tone of their voice. This is then shown on a ‘barometer of joy’.

“We are also having discussions with Dubai Electricity and Water Authority and they are trying to implement the technology, which can identify emotion, at public centres,” he reveals.

Perhaps one of the most ambitious projects unveiled at GITEX though came from an organisation from the UAE itself, with the unveiling of the Klip application by Emirates Digital Wallet.

The digital payment app, backed by 16 UAE banks, is aiming to make all transactions in the country cashless, from an estimated 75 per cent of the economy that is cash-based today, according to UAE Central Bank figures.

Read: UAE app aims to make half of transactions cashless in 5 years

“We believe strongly it will take time to get out of the mentality of cash,” says Emirates Digital Wallet general manager Maki Vekinis.

“We’re not going to push, what we’re going to do is use case pilots in a small geography.”

These pilot projects are expected to begin in the opening months of next year and will gradually be expanded, as use cases are addressed, until the app is ready for a nation-wide rollout among shops and consumers.

“Cash is cash,” says Vekinis. “For us we will be very successful if we have 50 per cent conversion in five years.”

As these and other projects continue apace the message from Smart Dubai’s Bishr to the private sector is clear.

“We are opening Dubai as a platform to attract all developments and entrepreneurs who have ideas and technologies to bring it here,” she says.

Clearly there will be many more innovations to come as Dubai continues on its journey to become the region’s technology hub.