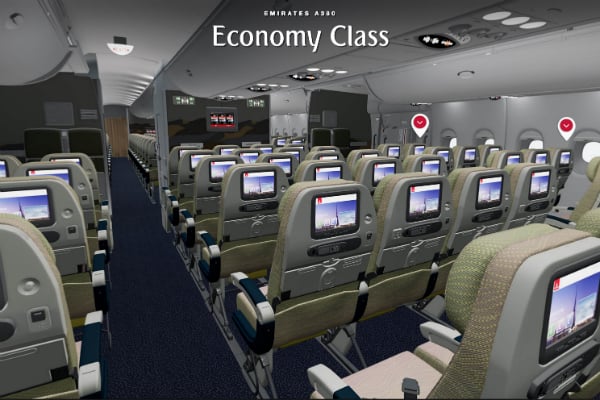 Passengers travelling with Dubai carrier Emirates can now view a 3D rendering of their seat and the wider cabin before selection following the launch of a new virtual reality (VR) service.

The visualisation engine, build by Renacen, will offer customers an immersive 360-degree view of the first, business and economy cabins on Airbus A380 and Boeing 777 aircraft.

Users can navigate using a VR headset like Google cardboard and also view the onboard lounge and shower spa available on A380s using navigational hotspots.

Passengers can access the service via the Emirates website or app and explore their seats before checking in online using the 3D seat map.

Emirates said would-be customers can also book their preferred seats from within the 3D environment, although functionality appears more limited for now.

“We are pleased to be the world’s first airline to introduce this cutting edge web VR technology, which offers our customers an immersive opportunity to learn more about the fantastic Emirates experience before they step on board,” said Emirates SVP of corporate communications, marketing and branding Alex Knigge.

“In our usability tests with customers, we found that they particularly appreciated the 3D seat and cabin models when selecting their seats.”

The service is initially available for the three-class Emirates A380 but will eventually include all configurations of the superjumbo and Boeing 777.

Emirates and its Abu Dhabi rival Etihad also announced trials of VR headsets in their lounges earlier this year to offer customers films and other content.