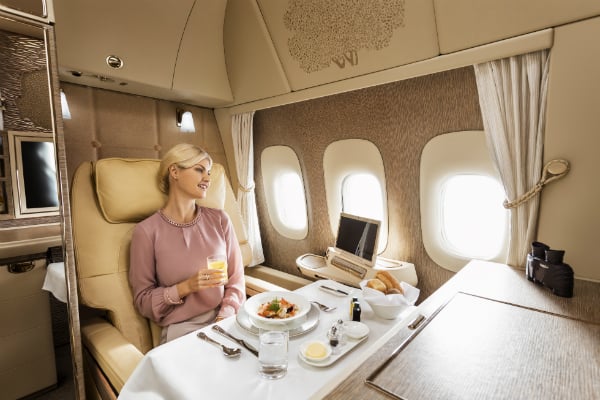 Dubai carrier Emirates said on Monday it would begin offering its new first class product on its Vienna route from December.

Other features include a ‘zero-gravity’ lie-flat bed mode for sleeping, a hatch for cabin crew to deliver food orders and storage space via an overhead compartment and full-length cupboard.

Suites positioned in the middle of the cabin also have artificial windows linked to high-definition cameras on the exterior of the plane.

Emirates said the Boeing 777-300ER first class product would be introduced on one of its two daily flights between Dubai and Vienna from December 1.

EK125 offering the product will depart from Dubai International at 4:50pm and arrive in Vienna at 8:00pm. Return service EK126 leaves Vienna at 9:55pm and arrives in Dubai at 6:35am the next day.

The carrier’s new Boeing 777-300ER was first introduced on its Geneva and Brussels routes.