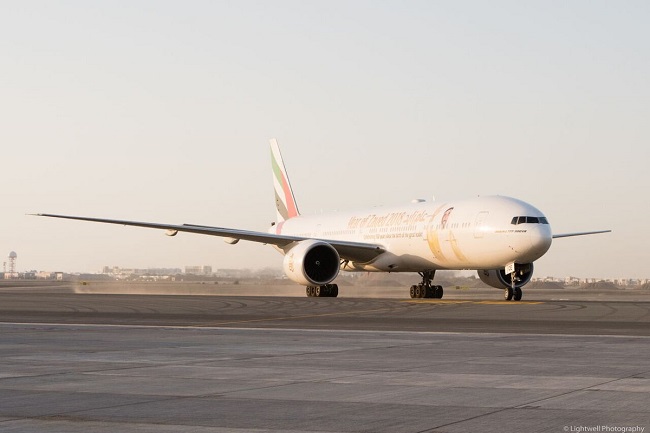 Dubai carrier Emirates has announced that flights to Japan’s Osaka have been cancelled on Tuesday and Wednesday due to Typhoon Jebi.

The storm, Japan’s strongest typhoon in 25 years, made landfall in western areas of the country earlier today bringing 107mph winds.

Kyodo new agency said at least two people have been killed so far.

An Emirates spokesperson said in a statement that all flights into and out of Osaka Kansai International Airport have been cancelled on September 4 and 5 after the airport closed due to heavy flooding.

Operations have since been suspended indefinitely after a ship collided with the bridge linking the island airport to the mainland. Officials said one runway was also underwater and one terminal basement was flooded.

On Wednesday, the airport began an operation to rescue the 3,000 staff and passengers stranded there by ship to a port at Kobe Airport.

“Customers connecting onto affected flights to Osaka will not be accepted at the original point of departure until further notice,” the Emirates spokesperson said.

“Passengers who have already started their journey and are enroute will be offered re-route options to Haneda and Narita airports subject to availability.”

Emirates customers booked to travel to or from Osaka have the option to change their flights and postpone departure up to seven days later than originally booked.

New flights can be scheduled via travel agents or Emirates booking offices.

The airline advised passengers to ensure their contact details are correct to receive any updates.

Emirates flies daily from Dubai International Airport to Osaka and will upgrade the route to be served by an Airbus A380 from October 28.