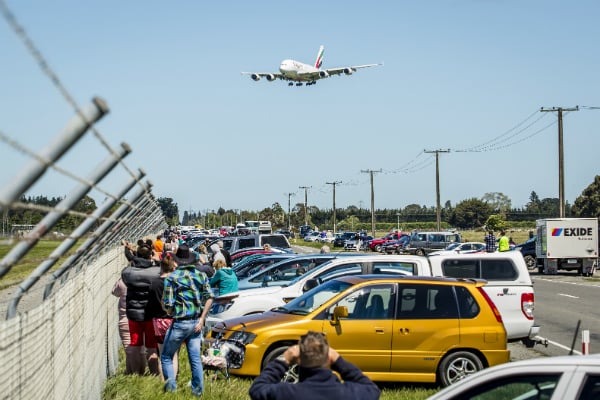 Dubai’s Emirates has announced the introduction of the Airbus A380 on its direct Auckland service and indirect Christchurch route.

The carrier said the changes meant all five of its daily New Zealand routes are now served by the superjumbo.

Read: Emirates to introduce A380 on daily Dubai-Auckland route

The Christchurch route was previously served by a Boeing 777-300ER, while the 16-hour Dubai Auckland service was served by a 777-200LR.

The carrier also operates three daily services between Dubai and Auckland via Sydney, Melbourne and Brisbane.

Emirates said the change would make it the first carrier to offer regular A380 service to and from Christchurch.

The introduction of the aircraft will also mean the route will no longer stop en-route in Bangkok instead just stopping in Sydney. This will cut two hours off of the journey time each way.

A London bus greeted the arrival of the service in Christchurch overnight to symbolise that passengers could travel all the way between the city and London via A380.

EK412 departs Dubai at 10:15am, before stopping in Sydney and arriving in Christchurch at 1:50pm the next day.

EK413 than leaves Christchurch at 6:45pm and arrives in Dubai at 5:15am after stopping in Sydney.

The carrier’s Auckland service via Sydney, EK418 will now also stop in Bangkok, departing Dubai at 8:55am and arriving in Auckland at 3:55pm the following day.

Return service EK419 will depart Auckland at 4:30pm and arrive in Dubai at 6:45am the next day.

All New Zealand services will be served with first, business and economy cabins.