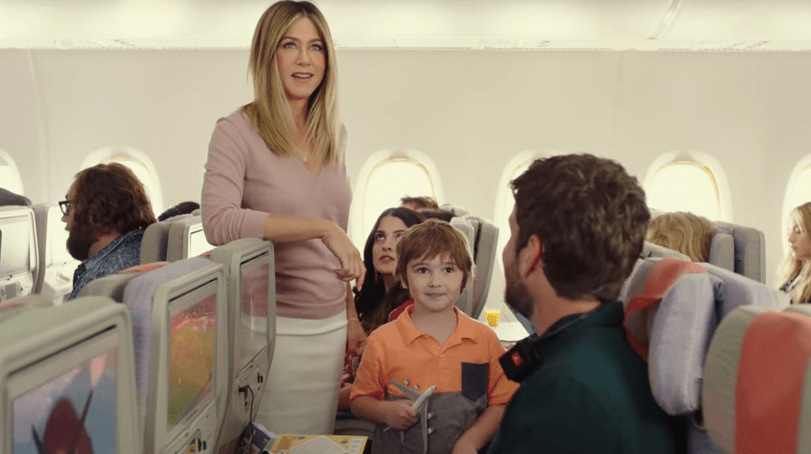 The airline previously teamed up with the Friends star in a $5m ad deal last year.

In the short clip, Aniston is shown enjoying a shower onboard an Emirates A380 before returning to her first class seat to find a child playing with a toy plane.

The two chat and she agrees to be his ‘co-pilot’ as they venture through the business class section, bar area and back to the boy’s family in economy class.

It ends with Aniston enjoying the economy class service and entertainment while the boy’s mother experiences her first class suite.

The previous ad showed Aniston having a nightmare in which flight attendants aboard an apparently American airline laugh at her for asking where the shower is.

She later awakens aboard an Emirates plane in first class realising it was all just a bad dream.

“The humour resonated with audiences around the world, and the ad was viewed by millions of people, generating thousands of conversations. Fans of both Emirates and Jennifer loved her effortless charm and humour, and enjoyed a story that deviated from traditional airline advertising,” said Boutros.

“We were overrun with requests to see Jennifer again. She has an enduring, universal appeal that is at once sophisticated, but also down to earth – a great match for our brand.”

The new ad was directed by industry veteran and Oscar-nominee Bryan Buckley, who is acclaimed for his numerous Super Bowl ads.

The script and creative concept was a collaboration between Buckley and the airline’s in-house advertising team, produced in conjunction with the WPP Group.