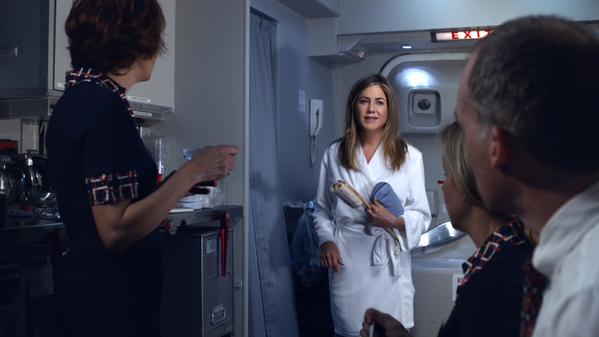 Dubai airline Emirates has released its first advertisement featuring Hollywood actress Jennifer Aniston after signing a deal reportedly worth $5m with her earlier this year.

As part of the deal, the Friends star will serve as the face of the carrier – specifically for television adverts.

The first ad featuring Aniston was uploaded as a one-minute video on YouTube on Monday and shows the actress roaming around an aircraft in a dazed manner.

She is further disconcerted when the cabin crew laugh at her enquires for shower facilities and a bar.

The next shot shows Aniston waking up on-board the first-class suite of an Emirates A380 aircraft and describing her “nightmare” to the bar attendant.

Emirates’ divisional senior vice president of Corporate Communications, Marketing & Brand Boutros Boutros said: “In a departure from the usual airline industry ads, we chose to take a humorous approach to showcase the products we offer on board. We couldn’t think of anyone better suited for the role than Jennifer Aniston and we wrote the script with her in mind. Her professionalism and comedic talent shone on the set and we are very pleased with the outcome.”

The TVC was directed by Bryan Buckley, RKCR/Y&R London developed the concept while the script was a collaboration between the agency, Buckley and Emirates’ in-house advertising team.

The digital and television campaign will begin in the United States and the United Arab Emirates before being rolled out in November to other countries including the United Kingdom, Germany, France, Italy, India and Australia, the airline added.

Emirates’ deal with Aniston follows a similar one inked by Abu Dhabi carrier Etihad Airways, which signed on actress Nicole Kidman as a brand ambassador.

The actress also shot a minute-long advertisement for the airline six months ago, marketing Etihad’s latest luxury offering ‘The Residence’ aboard its A380 aircraft.