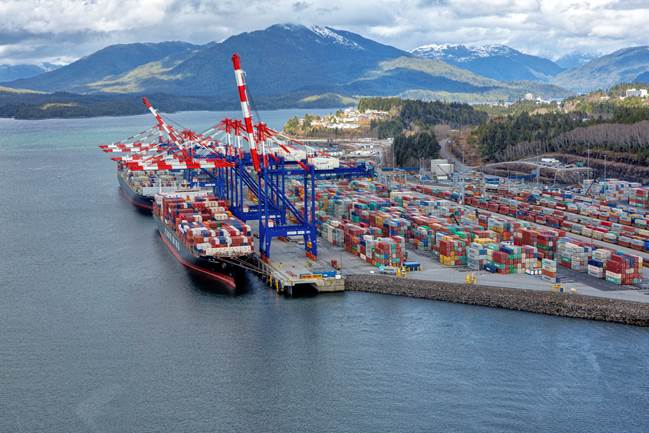 Dubai ports operator DP World has unveiled the next phase of expansion for Canada’s Prince Rupert Fairview Container Terminal alongside its partners.

The ‘phase 2B’ expansion will increase annual throughput capacity at Canada’s second largest container terminal from 1.35 million twenty-foot equivalent units (TEUs) to 1.8 million upon completion in 2022.

The previous phase 2A increased capacity by 500,000 TEUs when it was completed in August last year.

DP World said construction would begin in mid-2019, with capacity expected to reach 1.6 million TEUs in 2020 following the completion of an expansion to a container yard from 32 hectares to 41 hectares.

A truck gate at the south end of the container terminal will also be relocated and connect with the Fairview – Ridley Connector project being built by the Port of Prince Rupert and on-dock rail capacity will be boosted with an additional 6,680 feet of working track to 24,680 feet by 2022.

“Canada is an important part of our global network and we are delighted to confirm these plans, which underline our commitment to Prince Rupert, which plays a major role in enabling trade in the region and across the west coast with rail connections inland to the rest of the country and the United States,” said DP World group chairman and CEO Sultan Ahmed Bin Sulayem.

The expansion work is expected to create the equivalent of 300 full-time jobs at the terminal.