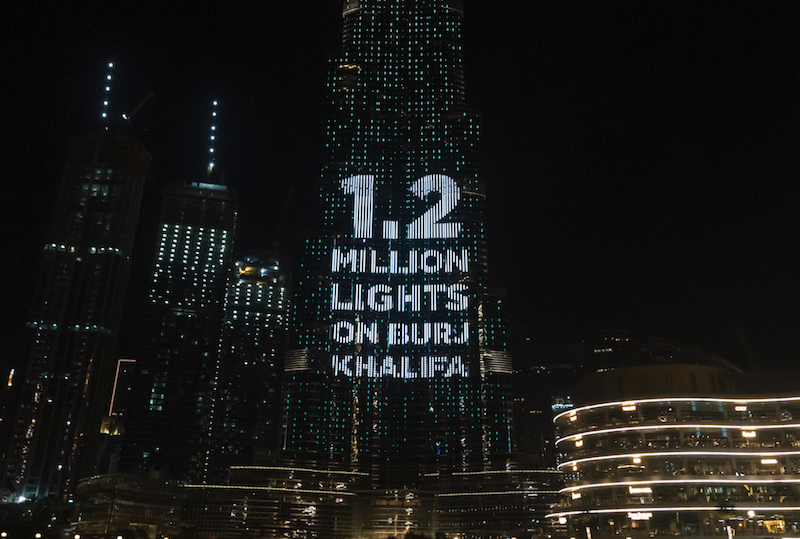 The Burj Khalifa’s campaign to secure 1.2 million donations met its target on Monday.

The initiative known as the World’s Tallest Donation Box was launched by the Mohammed bin Rashid Al Maktoum Global Initiatives (MBRGI) on May 2 as part of the 10 million meals campaign.

Besides the financial donations that poured in from people belonging to 110 different nationalities, the initiative received unique in-kind contributions including fast food vouchers from Burger King, McDonald’s and Texas Chicken and a special song titled Stronger Together produced by Anghami, reported official news agency WAM.

The World’s Tallest Donation Box at the Burj Khalifa hits the 1.2 million-light mark, achieving its target of collecting 1.2 million meals to support the #10MillionMeal initiative in a week, thanks to individuals of more than 110 nationalities. pic.twitter.com/vzOYau7S8Y

Revenues generated from the song streams were donated to provide food support to those in need.

While Anghami created a 1.2 million tracks playlist and placed a donate button on its platform, Amazon too dedicated a space on its portal to direct users to donate to the initiative.

“Achieving the target of the World’s Tallest Donation Box in record time reflects the solidarity of the UAE’s society, with all its segments coming together to support those in need. The deeply-rooted values of giving, consolidated in society by our wise leadership, set the UAE as a global role model for humanitarian work and social cohesion, ” said Muna Alkindi, CEO of MBRGI

“Now is the right time to stand together in solidarity and lend a helping hand to those affected by the Covid-19 pandemic,” she added.

The Burj Khalifa campaign enabled companies, entities and the public to purchase lights of Burj Khalifa at Dhs10 each. In turn, a meal or food parcel would be donated for every light purchased to low-income individuals and families in the UAE.

In the first 24 hours of the campaign’s launch, 180,000 donations were recorded.

Sheikh Mohammed bin Rashid Al Maktoum, Vice President and Prime Minister of the UAE and Ruler of Dubai launched the 10 million meals campaign in April to donate meals during the month of Ramadan.

Within the first week of its launch, the campaign exceeded its target and provided over 11 million meals.

That campaign is still active though. There are multiple ways for people to donate to it.

There is even a provision to make in-kind donations to donate food supplies and parcels by contacting the campaign’s toll-free number 800 4006.