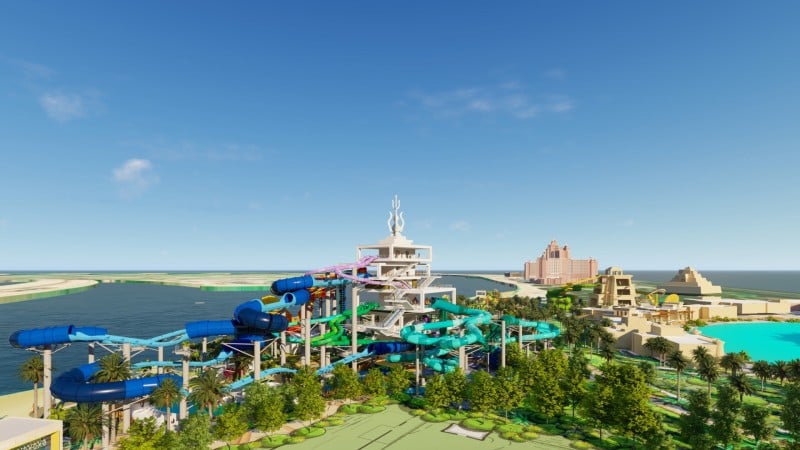 The addition will help the park become “one of the biggest waterparks in the world”, it said in a statement.

The new 34-metre tall ‘Trident Tower’ will introduce 12 new slides to Aquaventure, which currently has more than 20 rides and rivers spread across 17 hectares at Palm Jumeirah.

Some of the new rides planned include the world’s longest ProSlide MammothBLAST, a 449-metre water coaster which will see rafts go through winding channels with back-to-back curves, drops and uphill climbs, as well as the Middle East’s first-ever ProSlide Dueling PIPElineBLAST/FlyingSAUCER 20 hybrid ride – a high-speed ride, and a RallyRACER 32 ride.

Also planned is an updated version of the Leap of Faith slide, which will have two slides rather than one – each dropping more than 34 metres down.

A new kids’ area will also be added with highlights including four mini versions of classic adult rides.

Tim Kelly, executive vice president and managing director, Atlantis The Palm and The Royal Atlantis, said: “We have carefully curated each attraction to ensure that we deliver first-of-its-kind ride technology for children, families and thrill-seekers alike.”

To boost visitor numbers, the park recently introduced a two-day pass with prices starting from Dhs250, which also gives visitors access to the Lost Chambers Aquarium – home to more than 65,000 marine animals.

Aquaventure’s expansion project in 2020 comes even as Atlantis prepares to launch The Royal Atlantis Resort & Residences in Q3 2020.

Located adjacent to Atlantis The Palm on the crescent, the new property will extend the footprint of the resort to help the overall site include a 2.3 km stretch of private beach, 35 restaurants and bars and one international beach and nightclub.

Totalling 43 storeys, The Royal Atlantis will feature 231 apartments, 795 hotel rooms, more than 90 swimming pools and a rooftop Skypool, suspended 90 metres above The Palm.

Atlantis, The Palm, which opened in September 2008, is the first entertainment resort destination in the region featuring a variety of marine and entertainment attractions.