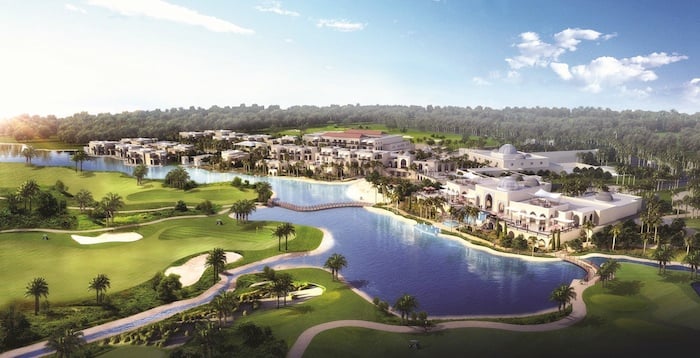 Dubai contractor Arabtec Holding announced on Tuesday that its wholly owned subsidiary had been awarded a Dhs628m contract from Damac Properties.

Arabtec Construction won the contract for the design and construction of the main works for 1,296 villas at the Akoya Oxygen master development in Dubai, a bourse statement said.

The statement did not specify which project the villas belonged to.

The 24-month project will commence this quarter, Arabtec said.

Akoya Oxygen is a 55 million square foot development that features an 18‐hole championship golf course along with residential, retail, entertainment and hospitality components.

The golf course, designed by Tiger Woods, will also feature a clubhouse, restaurants and a pro-shop. The golfer visited the property to oversee its progress in February.

Meanwhile the golf club will be the second in Dubai to be operated by the Trump Organization.

Damac has awarded several contracts for the development this year, including a Dhs40m contract for roads and infrastructure works at Vardon cluster in May and a contract worth Dhs58.4m for the main structural works of villas at Mulberry cluster in April.

Arabtec’s group CEO Hamish Tyrwhitt said: “We are pleased to be continuing our long standing collaboration with Damac Properties. Arabtec’s recent awards show that our selective
onboarding of projects across our operating businesses is developing a strong pipeline of work aligned with our core competencies and strategic direction.”

EFECO entered into a contract with Al Naboodah for the MEP works of the Creekside 18 development, which includes two 37-storey residential towers.

In May, Arabtec also reported its first quarterly profit since 2014, thanks to new projects and cost savings.