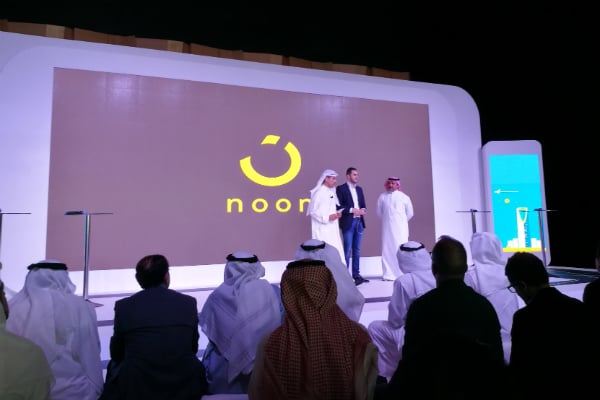 Noon.com is being launched with an initial investment of $1bn with the Saudi Public Investment Fund and Alabbar and other Gulf investors contributing $500m respectively. Both sides will take a 50 per cent stake.

The operation will be headquartered in Riyadh with 10 million square feet of warehousing across the UAE and Saudi Arabia, including 3.5 million at a Dubai fulfilment centre.

It will launch in Saudi Arabia and the UAE in January with 20 million products across the fashion, books, home and garden, electronics, sports and outdoor, health and beauty, personal care, toys, kids and baby products sectors.

“We have the credentials to dominate and that’s the only thing we’re going to do,” Alabbar said at the launch when asked about competition.

Currently the regional e-commerce market is led by Souq.com, which has been seeking buyers for an at least 30 per cent stake valuing the company at $1.2bn, according to reports.

Fodhil Benturquia, the CEO of the new company and the former country manager of Souq.com in Saudi Arabia, told reporters that its 20 million product offering would be 10 times larger than any competitors in the region.

Looking longer term, Alabbar said the company was being built with an eventual goal of an initial public offering in “five to seven years” time.

However, he denied any plans for a tie-up or investment from global giant Amazon.com after the two were linked in recent weeks.

Its more immediate goals include growing online sales in the region from 2 per cent of the total market, or $3bn, to 15 per cent, equal to $70bn, within a decade.

To do so the company is building its own wholly owned payment platform, dubbed Noon Pay, and is partnering with regional logistics firm Aramex for delivery.

This follows the purchase of a 16.45 per cent stake in Aramex led by Alabbar and other Gulf investors in July.

Aramex CEO Hussein Hachem said the firm’s new app would be used to track orders and give customer feedback.

After the initial launch in Saudi Arabia and the UAE, Noon plans to begin operations in the wider Gulf, Iraq and the Levant.