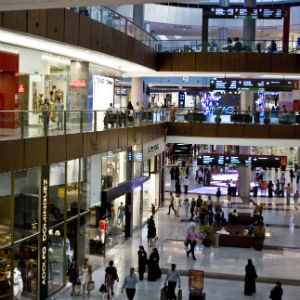 Dubai has always been considered the Mecca of shopping in the region, and its reputation only seems to be getting stronger.

The emirate is the second most attractive city in the world for international retailers, according to a recent survey conducted by property adviser CBRE.

The annual survey, which tracked 326 international retailers, found that Dubai attracted 53.8 per cent of the brands surveyed, second only to London with 55.5 per cent.

In line with that, Dubai’s Mall of the Emirates announced last week that it will open 20 new stores and dining outlets this year, including several first-time concepts to the UAE.

Handbag and accessories store Coach has already opened at the mall, Italian luxury brand Prada will open its third largest store worldwide in June, and brands like GAP, Top Shop, and Aeropostale will also be opening outlets in the mall.

Mall of the Emirates, which currently has 80 designer stores, will also expand its food and beverage offerings, and is bringing in American pancake house IHOP for the first time to the UAE.

“Growth within the UAE retail market is being driven by several factors, however tourism and the rising popularity of destination malls are having the largest impact in growing demand,” said Karima Berkani, senior research analyst, Euromonitor International.

However, in the past two years, tourism has emerged as one of the key drivers in the UAE’s retail market.

“Following the Arab Spring, the UAE saw an increase in tourists who rerouted their vacations. In particular, regional tourists from countries such as Saudi Arabia began coming to the UAE for weekend trips rather than Bahrain. This trend has continued into 2012,” she said.

Dubai’s hotels recorded a nine per cent increase in guest numbers during the first quarter of the year, according to Dubai’s Department of Tourism and Commerce Marketing.

In terms of source markets, Saudi Arabia topped the list with 272,631 guests, followed by India, the UK, the US and Russia.

“Tourists are now coming from China and Russia and tourists from the GCC and MENA also continue to visit the UAE in record numbers and support the retail growth as shopping is part of their vacation,” he said.

“With the Arab Spring events of the past year, many wealthy new families have also relocated to the UAE seeking safety and security while further boosting the retail spending,” he added.

Spurred by the growing demand, Emaar Properties also recently announced that The Dubai Mall will add more than one million square foot to its existing 12 million square feet area.

Additions will include new hotel rooms and entertainment and lifestyle choices, it said. The Dubai Mall currently has over 1,200 stores and 160 F&B outlets.

“The expansion to the mall, which hosted more than 54 million visitors in 2011 to become the world’s most-visited shopping and leisure destination, will take The Dubai Mall and Downtown Dubai into the next era in retailing, entertainment and lifestyle,” Emaar said.

But is such rapid expansion sustainable? Will the new stores manage to pull in the buyers?

“Destination malls such as Dubai Mall and Mall of the Emirates maintained high occupancy rates and rent prices throughout the recession as well,” said Berkani.

“Entertainment attractions such as the Dubai Fountain and Ski Dubai boost footfall at these malls, particularly among tourists as they have become iconic tourist attractions,” she said. And with increasing footfall, they have been able to increase their revenues.

Revenues from the firm’s malls and hospitality segments grew 25 per cent compared to the same period in 2011.

“New shops continue to pull in crowds,” said Macadam. “Prada for instance has not had a large presence in the UAE retail landscape. Luxury retail brands sales in the UAE have fared very well in the past and the future looks even more promising.

“With world leading infrastructure within Dubai starting with the airline service, the airport, customs, road networks, world class hotels, cleanliness, security, power and water, the region will be a magnet for retail for long into the future,” he added.