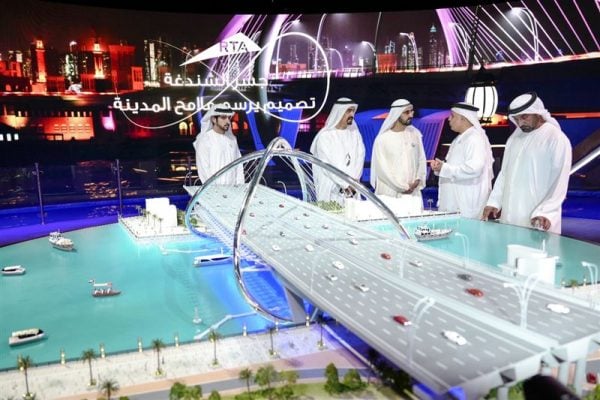 The bridge itself will span 295m and 15.5m above water level, with six lanes of traffic in each direction and a pedestrian crossing.

A key aspect of the design is an architectural arch shaped in the form of the mathematical symbol for infinity, which rises 42m.

The height of the bridge will allow various types of boat to move unimpeded underneath.

Around 2,400 tonnes of steel will be used in the construction.

The third phase of the project includes the Shindagha Bridge, the construction of the Corniche Street on Al Khaleej Street, improvement work at Falcon Junction and entry/exit points for Rashid Port.

In total it will comprise 8.5km of bridges, 535m of tunnels, 10 surface junctions and 8km of surface roads and is due to be completed in 2022.

A further fourth phase will include the extended of Shindagha Bridge, improvement of Al Khaleej Street along with its intersection with Abu Hail Street and the intersection of Sheikh Rashid Street with Jumeirah Street, Al Mina Street and Al Mankhoul Street.

Phase will cover the construction of Deira Southern Island, with bridges spanning 1.5km, is expected to be completed by 2027.