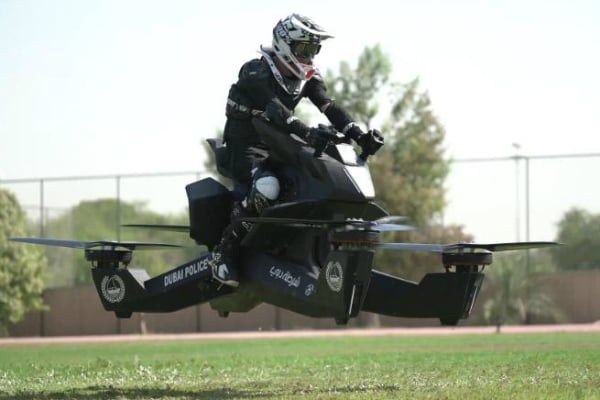 Dubai’s police force is training to use hover bikes for emergencies in the not too distant future.

CNN reports that HoverSurf, which partnered with Dubai Police to display a branded version of its S3 hover bike at the Gitex technology event last year, has gifted officers its first production model.

Officers are now training to use the S3 2019, with the general director of the force’s artificial intelligence unit, brigadier Khalid Nasser Alrazooqi, saying he aims to use the vehicles for hard to reach emergencies by 2020.

“Currently we have two crews already training [to pilot the hover bike] and we’re increasing the number,” he was quoted as saying.

He added that Dubai Police will have exclusive rights to as many units as they want.

“They’re going to let us know in the next month or two if they’d like any more … If they would like 30 or 40, we’ll make it happen for them,” Segura-Conn said.

Each bike costs $150,000 and buyers have to pass a screening test, but they do not need a pilot’s license.

HoverSurf is understood be considering three different manufacturing sites for the S3 2019 including Dubai.

A video of last year’s version being tested at the Dubai Police headquarters can be found here.

It wants robots to make up 25 per cent of its patrolling officers by 2030.