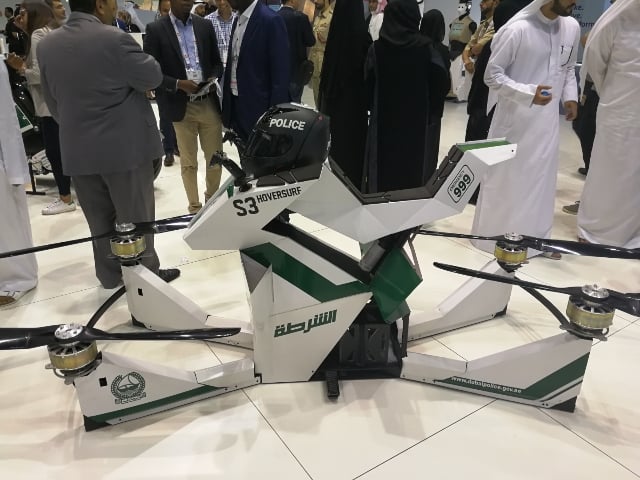 Dubai’s police force is testing a new hover bike concept that could be used to reach emergencies more quickly by 2020.

The battery-powered Scorpion, developed by Russian drone manufacturer Hoversurf, is on display at the Gitex exhibition in Dubai this week.

A video posted by HoverSurf on Youtube shows the bike being tested in an open tarmac area as officers look on.

Hoversurf said it produced a special version for the emirate’s police force.

The Scorpion started as a crowdfunding project and is designed for extreme conditions. It features a safety system, flight controllers and special logical programming.

Current units can fly for up to 25 minutes with a pilot at a maximum speed of 42mph, while carrying 300kg of weight. They are also capable of flying without a pilot and can reach heights of five metres in this mode.

Other projects under development by the Russian company include a drone taxi that is capable of fitting within a parking space and a cargo drone with a carry weight of 100kg.

It wants robots to make up 25 per cent of its patrolling officers by 2030.