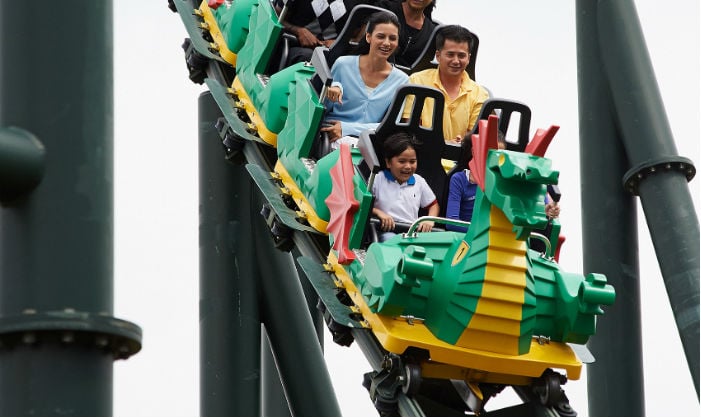 The park will be one of three – including Hollywood and Bollywood themed attractions – that will form the company’s mega destination on the outskirts of Dubai.

It will include 60 rides, shows, water slides, attractions and building experiences and incorporate 60 million Lego bricks, according to the firm, and has been designed for families with children aged between two and 12.

This indicates the plans for the park have been revised since an announcement in 2015.

Among attractions, children aged three will be able to get a Legoland driver’s licence at the Lego City Driving school while those aged six to 12 will be able to learn about road safety and drive around the city in 45 mini electric cars.

The Dragon Coaster, the park’s biggest ride will stand 16 metres high and reach speeds of 60kmh.

The largest model in the park outside of Miniland will be the Icon Dragon, which took 3,900 hours to build using 395,251 bricks, while the smallest the Minilander will use just 20.

Attractions at the water park will include the Duplo Wave Pool for children two years old and under and the Joker Soaker’s bucket, which will spill 300 gallons of water every few minutes.

The park will also feature a 4D movie theatre that will exclusively show the Lego Movie 4D: A New Adventure in the region and a Submarine Adventure home to 2,230 fish, sharks and invertebrates across 60 different species.

Legoland recently launched annual passes allowing visitors to gain entry to the park before its official opening. The price is Dhs 765 for access to the main park only with a joint pass including access to the water park priced at Dhs 995.

The Dubai Parks and Resorts complex will feature three parks when it opens including Hollywood themed motiongate, Bollywood Park Dubai and Legoland Dubai; a retail, entertainment and dining walkway called Riverland Dubai and the Lapita Hotel.

The company has also raised money for a Six Flags theme park set to open in the fourth quarter of 2019.