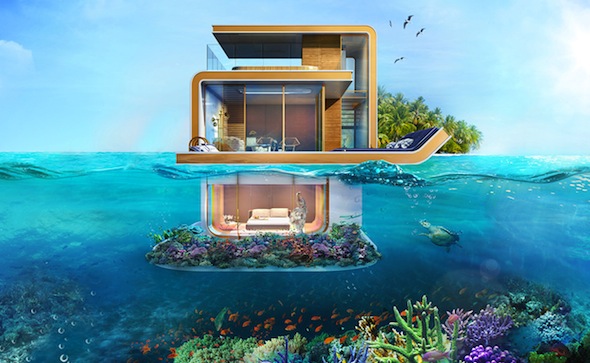 A project compromising floating villas harboured 4km offshore at Dubai’s World islands is lacking in basic approvals from authorities, according to reports.

Gulf News said its own investigations had revealed the Dhs15m ($4m) Floating Seahorse units sold by Austrian developer Kleindienst Group did not come under the remit of Dubai Land Department (DLD) or Dubai Maritime City Authority.

The claims follow the sinking of a model in rough seas near the Burj Al Arab on January 3 after it had been used for New Year’s Eve celebrations.

Gulf News said another fell into the sea when being transported onsite and a third show home is held in place by sandbags.

DLD senior director Khalifa Alsalafa told the publication: “After reviewing the contracts of the boat it is clear that the company marketed to sell this vessel is licensed by Dubai Maritime City Authority.”

Dubai Maritime City denied it had anything to do with the project.

Kleindienst, which has sold more than a hundred of the villas off-plan to date and is building them at the city’s Drydocks, denied there was anything untoward.

“Given the unique nature of the project, regulations for these types of developments are evolving all the time and we are at the forefront of assisting various government departments to achieve this,” the company said.

“Current government guidelines provide for floating home classifications so the authorities have already envisaged this type of development occurring in the UAE, but Kleindienst is the first to mass produce the above and underwater concept.”

It added that the villas were considered ‘floating units’ by the UAE’s Federal Transport Authority and the majority would be used for short-term resort accommodation.

The first handovers are expected to begin this year, according to the company.

The World islands master developer Nakheel said it had approved “the concept of a series of non-motorised houseboats to be permanently moored at their designated locations and used as dwelling units, subject to relevant authorities’ approvals”.

But other approvals covering floor areas, built-up area and sea area and the technical and safety specifications come under the relevant Dubai authorities.

Kleindienst is undertaking the Floating Seahorse project as part of its wider Heart of Europe development at The World islands.

The company said it had awarded $1.3bn of construction contracts for the project in late 2016, including hotels on its main hub known as Main Europe Island, villas on Germany Island, buildings and resorts on St Petersburg Island and buildings and infrastructure on the other three islands of the project.

Up to 70 per cent of the The World islands were sold when the master development was originally launched but most have stood empty since work stopped during the financial crisis in 2008/2009.

Kleindienst Group has been one of the only active developers since the after ending a dispute with Nakheel in 2013 through a May 2013 settlement of Dhs622m ($170m).

Last September, the company added to Heart of Europe with The Floating Venice – dubbed the world’s first luxury underwater resort.

The Dhs2.5bn ($680m) development is designed to accommodate 3,000 guests a day and includes accommodation, restaurants and recreation split over four decks – one of which will be underwater.

Construction was scheduled to begin in the first quarter of 2018 and be finished by the end of 0218.