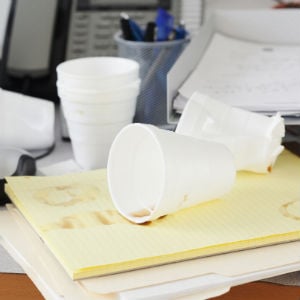 Untidy, foul-smelling and poorly designed offices cost Middle East companies Dhs2 million on average in lost revenue, according to a survey by research company YouGov and The Office Exhibition.

The survey, which interviewed 1,172 CEOs and directors from across the MENA region, found that 85 per cent of the respondents were concerned about a company’s professionalism if their offices did not look respectable.

The main factors that influenced their decision included dirty or untidy offices, unpleasant smells, noisy or chaotic offices and cheap or outdated decor.

“A healthy workplace environment not only boosts productivity, it signals professionalism and inspires confidence in the company’s product or service,” David Wilson, event director of The Office Exhibition said in a statement.

“Conversely, offices which smell of food or cigarette smoke, are dirty, or have furniture that is old and unwelcoming turn business away,” he added.

According to the survey, 69 per cent of the respondents also said they find themselves wanting to leave a meeting early because of uncomfortable seating. Another 56 per cent said that they avoided meeting at someone’s place of work because they did not like their offices.

“Poorly designed offices will see business walk straight out the door – if it even reaches the front door in the first place,” said Cheryl Durst, executive vice president and CEO of the International Interior Design Association.

“When you add to that the more intangible costs of low employee morale and poor work rates, it is reasonable to assume that the true cost of bad office design to a business could reach millions of dollars,” she said.