On a diplomatic mission: The UAE's ambassador to the UK - Gulf Business 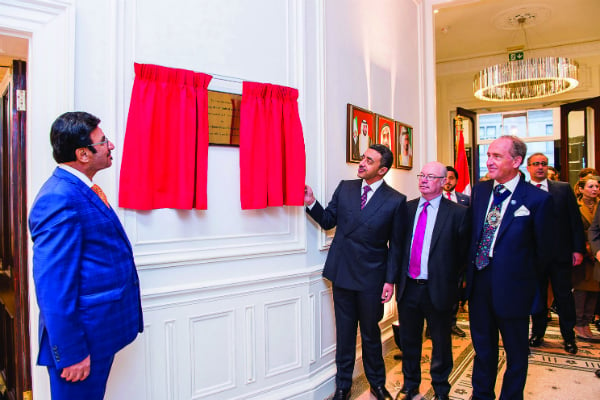 Visiting the UAE Ambassador to the Court of St. James, His Excellency Sulaiman Hamid Al Mazroui, at 1 Grosvenor Crescent, he is justifiably proud of the mission’s new home.

The embassy was moved from the previous location at Prince’s Gate a year ago this month. The impressive building occupies the corner plot of Grosvenor Crescent overlooking the gardens of Grosvenor Square. It has been tastefully renovated and restored to its original splendour – and in the process many original features such as the impressive mosaic floors have been exposed and brought back to life.

After a tour of the new building, we settled down to discuss His Excellency’s role and his thoughts on the future of UK-UAE relations.

“The relationship between the UK and the UAE has developed from strength to strength over the last 47 years,” he said.

“We have seen this relationship grow in all aspects; political, economic, cultural and consular.

“On the political side, both countries share efforts on combating extremism and terrorism. Both countries fought side by side in Afghanistan, against Daesh and to end piracy at sea.

“On the economic level, trade is growing. It currently stands at GBP17bn (Dhs81.5bn / $22.2bn). The target set by both governments is to reach GBP22bn (Dhs105.4bn / $28.7bn) by the year 2020. The UAE is one of the largest export markets outside the EU for the UK goods. This is due to world-class infrastructure in sea ports and shipping in the UAE.

“What’s more, some 1.5 million British tourists visit the UAE every year and more than 120,000 UK citizens live in the UAE.”

“There are approximately 3,000 Emirati students attending UK education institutions in various specialisations, and there are dozens of British academic institutions in the UAE.

“There are also hundreds of UAE citizens who visit the UK for medical treatment. The embassy’s medical office provides advanced services in guidance and follow-ups with various UK hospitals where Emirati patients receive medical care.”

With the UK being such an important destination for many in the UAE, the thorny issue of Brexit has often been a keen topic of conversation. And with the details of the UK’s withdrawal from the EU still being negotiated, I was curious how the ambassador sees the situation.

“The Brexit issues are constantly monitored by our embassy diplomats and specialists, though we believe that the UAE-UK relationship will be the same whether the UK is in or out of the EU,” he said.

“We welcome any decision the British people and government take on Brexit.”

As we sit in the embassy’s new offices, it’s hard not to be impressed by the building, which was inaugurated by His Highness Sheikh Abdullah bin Zayed Al Nahyan in November 2017. And as the ambassador explained, the new home says a lot about the UAE’s presence in the UK.

“The new embassy building lends itself to the importance of the role the embassy plays in the UK-UAE relationship,” he said.

“It provides a great working environment for our diplomats, as well as being a prominent location with the required prestige.”

Continuing the theme of prime real estate, our conversation turned to the enduring appeal of the UK for Emirati investors – especially London.

“For UAE citizens, London is one of the most important and desirable cities in Europe,” emphasised the ambassador.

“The UK real estate market is one of the attractive sectors for UAE investors, for both investments and personal use. Currently it’s a buyer’s market due to the uncertainty of Brexit, and as such, we are seeing a relative surge in property acquisition by Emiratis.”

But it’s not just London that is in investors’ sights, with other cities also garnering interest. Interest boosted by the focus UAE airlines put on the UK.

“While the UAE citizens, investors, students and patients prefer London due to its cosmopolitan appeal, other major cities also attract them,” explained Al Mazroui.

As we moved to discuss Al Mazroui’s previous role as ambassador to the Kingdom of Belgium and the Grand-Duchy of Luxembourg, we spoke about his work in Brussels – the de facto capital of the EU – that secured visa-free travel for Emiratis in Schengen and eight other European countries.

Naturally, I was curious to know whether he’ll be pushing for the same for the UK.

“Despite the fact that the UK is one of the most popular destinations for UAE citizens, they unfortunately still require normal entry visas or electronic ones,” he said.

“We believe that UAE citizens wishing to visit the UK deserve to have visas waived – especially as the UAE passport is now wildly accepted in around 160 countries visa free, including the EU countries.

“This will, no doubt, increase tourism and business for the UK.”

As we approached the end of our conversation, we touched on the cultural relationship that has been growing between the UAE and UK in recent years. It’s a relationship that saw His Highness Sheikh Abdullah bin Zayed Al Nahyan inaugurate the Sheikh Zayed bin Sultan Al Nahyan Gallery for Europe and the Middle East at the British Museum in September.

“This was a major success for the UAE-UK cultural relationship,” beamed the ambassador.

“This achievement is also timely as it was planned to coincide with the Year of Zayed, celebrated in the UAE this year.

“The significance of the Sheikh Zayed Gallery stems from the fact that it will always remind visitors of the UAE founder’s passion for history and culture.”

It’s the latest in a long-line of successes for a relationship that continues to blossom.

And as I left the Mission’s new home, it was clear the grandeur of the building is being matched by the hard work and ambitions of the ambassador and his team.