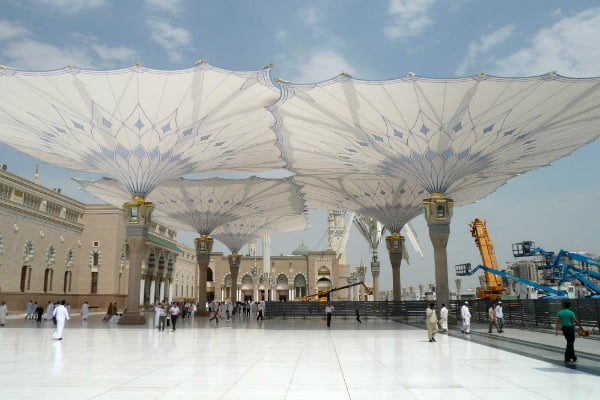 A dispute between contractor Saudi Binladin Group and German firm SL Rasch has reportedly seen 250 giant umbrellas at the Prophet’s Mosque in Madinah remain closed for the past three weeks.

Saudi Gazette cited a source as saying construction firm Saudi Binladin has stopped maintaining the automated canopies after it was unable to procure equipment and spare parts from SL Rasch, which it has a partnership with for maintenance.

The sources said the two have disagreements over the contract terms, according to the publication.

The equipment and parts have been ordered but there is no set timeline for their arrival.

The source said for the past three weeks the shades had not opened from 7am to 5pm as usual during Friday prayers.

Similar umbrellas have also been installed at the Grand Mosque in Makkah this year to provide shade to pilgrims and worshippers.

According to consultants Studio LD the Madinah umbrellas cover 14,500 square metres and feature a teflton membrane that allows sufficient light to filter through while protection pilgrims against strong solar radiation.

There are two types that stand at 14.40m and 15.30m in height respectively when open.

The system is automatic and adjusts to changes in temperatures.