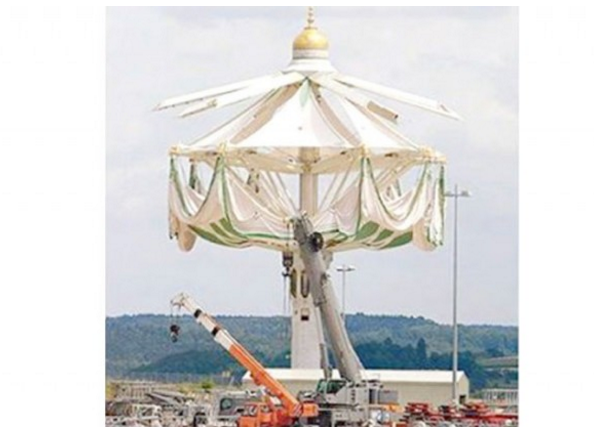 Work has reportedly started on the installation of the world’s largest folding umbrella on the northern courtyard of Mecca’s Grand Mosque.

The structure is the first of eight giant umbrellas and 54 smaller ones to be installed at the Grand Mosque in the next six months, according to Saudi Gazette.

Each larger unit will have a height of 45m and weigh 16 tonnes, providing shade to an area of 2,400 square metres when open.

The umbrellas, being manufactured in Germany, include giant clock screens to guide worshippers, air conditioners and surveillance cameras, it was reported.

Around 25 engineers, specialist technicians and safety experts from Germany will supervise the installation.

The 54 smaller umbrellas will be installed in the northern courtyard and cover a total area of 19,200 square metres. They will be accompanied by 122 benches for worshippers and service buildings.

Once the project is completed, the entire northern plaza stretching from the King Fahd Expansion structure to King Abdullah Expansion will be covered and have the capacity to accommodate 400,000 worshippers.

The late King Abdullah reportedly ordered the project in December 2014 before his death.

Nearly 250 similar umbrellas were installed in plazas around the Prophet’s Mosque in Madinah previously.

The design allows the umbrellas to fold and unfold in line with changes in the daily temperature. They will allow open in the day and close at night in the summer and operate in reverse in the winter to warm the ground.

Last August, an umbrella company in east China’s Jiangxi Province set the record for the world’s largest umbrella, at 23 metres in diameter and 14.4 metres high.