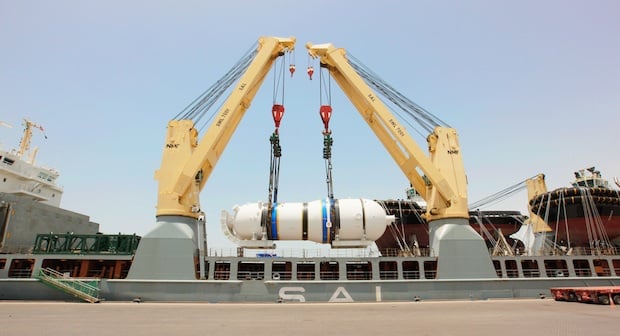 The Emirates Nuclear Energy Corporation (ENEC) has confirmed that work on its four-unit nuclear energy plant at Barakah is “progressing steadily.”

Overall, construction of Units 1 to 4 is now almost 68 per cent complete, it said in a statement on Wednesday.

ENEC also confirmed that it has installed the Unit 3 steam generators – which play a key role in the conversion of the energy generated by nuclear fission into electricity.

The two stainless steel generator units – similar in length to a tennis court – were manufactured in South Korea over four years by Doosan Heavy Industries, a member of ENEC’s consortium.

The generators were then transported to Barakah where they were installed inside the Unit 3 Reactor Containment Building (RCB).

“Each of Barakah’s steam generators contain numerous tubes that safely carry heated water at high pressure. These tubes are made of an alloy composed of nickel, chromium and iron, making them strong and corrosion resistant, even at high temperatures,” the statement added.

The heat generated from the nuclear reaction turns water into steam, which is then used to spin a turbine and generate electricity.

Over the next six months, further piping connection work will take place to connect the generators to the Unit 3 reactor vessel, turbine generators and condenser.

“The UAE has shown the highest level of commitment to international standards and best practice since the very start of the UAE peaceful nuclear energy programme,” said Mohamed Al Hammadi, ENEC CEO.

“We are dedicated to creating this new industry and sustaining it long into the future as a vital element of the UAE’s low-carbon economy.”

The Barakah nuclear energy plant is scheduled for completion in 2020, with construction having started in 2012.

With four reactors online, the facility will deliver up to a quarter of the UAE’s electricity needs and is expected to save up to 12 million tonnes in carbon emissions every year.